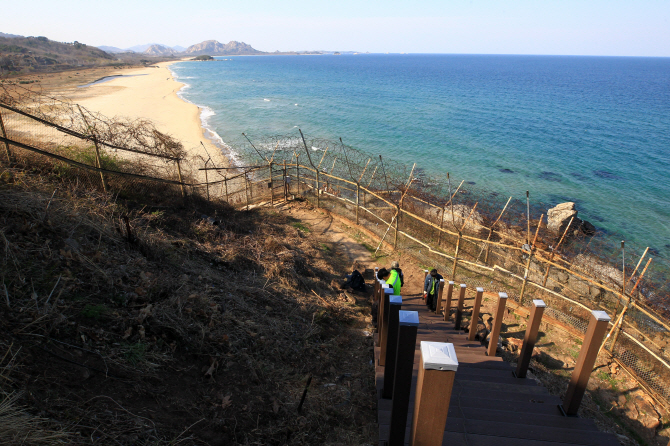 The DMZ, which is about 250 kilometers long and 4 km wide, is one of the world’s most heavily fortified borders. (Yonhap)

SEOUL, Apr. 23 (Korea Bizwire) — The United Nations Command (UNC) said Tuesday it approved the opening of the Demilitarized Zone (DMZ) separating the two Koreas for a hiking trail in the east coast border town of Goseong.

The Goseong course is one of three “DMZ Peace Trail” sites proposed by the South Korean government under its plan to open to the public the DMZ for the first time since the two Koreas were divided.

The two other sites are Cheorwon county in Gangwon Province and the western city of Paju in Gyeonggi Province.

Gen. Robert Abrams, who leads the UNC, “approved phase one of the Republic of Korea’s Peace Trail project at Goseong in Gangwon Province,” the UNC said in a release, adding that the Korean military has worked hard “to ensure the success … while assuring visitors their safety remains paramount.”

The tour program is widely expected to launch, on a trial basis, on April 27 at the Goseong course to mark the first anniversary of the Panmunjom Declaration signed by President Moon Jae-in and North Korean leader Kim Jong-un, according to government officials.

The tour will take place twice a day, six days a week, except Monday, with the maximum number of people allowed for the walking route being set at 20 at one time and the vehicle tour at 80, the officials said. The limits were set in consideration of military operations as well as environmental and ecological issues.

“(The peace trail) will join the other 13 existing UNC-approved DMZ educational sites as a location for inter-Korean exchanges and learning opportunities,” the UNC said.

The Seoul government has also said the project aims at having visitors experience inter-Korean peace and the security situation on the Korean Peninsula.

Since the signing of the comprehensive military agreement in September last year, the two Koreas have pushed for several tension-reducing measures.

The UNC oversees activities within the buffer zone.