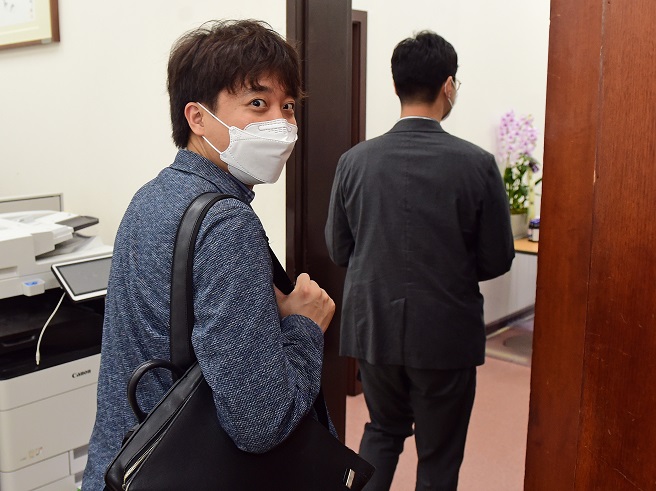 Lee Jun-seok, chief of the People Power Party, is on his way to join a party meeting on a party audition to choose its new team of spokespeople, on June 15, 2021. (Yonhap)

The party will conduct a three-week-long public audition to recruit two chief and two other deputy spokespersons, starting with an official notification of the audition Friday, according to the officials.

It is part of a series of sensational campaign promises Lee made running for the party leadership.

He has touted the new method of picking party spokespeople as a means to facilitate a change of culture in the conservative party and to give fair opportunities to party members, as opposed to the usual handpicking of spokespeople by a party leader.

The biggest conservative party has never before opted for a public audition to choose party spokespeople, except for the selection of a deputy spokesperson slot reserved for young party members.

The upcoming public notification of the audition will invite all people aged 18 or above to join the competition.

Applicants will be required to submit a short self-written commentary on each of three subjects to be announced by the party, along with a video clip showing them reciting the commentary.

The party expects the audition to draw as many as 1,000 applicants.

A total of 100 applicants will be chosen to sit for a “pressure interview” to be conducted by Lee.

Of them, 16 will be chosen to go through two rounds of competitive debates, scheduled for June 27 and 30, respectively, to claim the four spokespeople seats up for grabs, according to party officials.

The final four candidates will go up against each other in the final debate round set for July 7 to divide the four seats up among them.

The PPP said it will bring in not only conservative but also liberal figures to form the panel of judges to evaluate the debates, and private citizens will also be invited to join the evaluation through voting by phone.