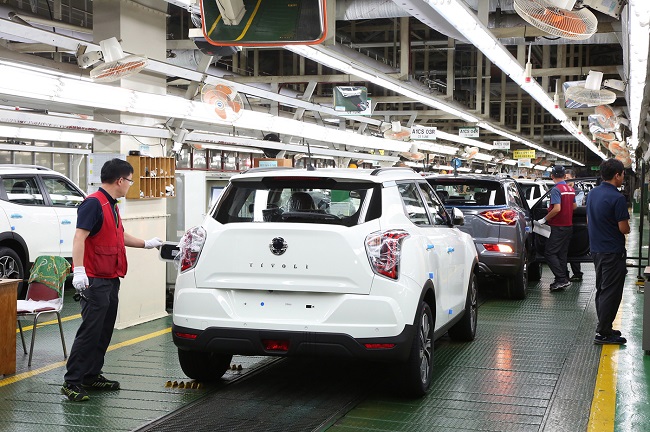 This photo provided by SsangYong Motor on April 14, 2022, shows an assembly line at its plant in Pyeongtaek, south of Seoul.

SEOUL, June 24 (Korea Bizwire) — South Korean underwear company Ssangbangwool said Friday it has submitted a bid for SsangYong Motor Co. in the auction to find a new investor for the debt-laden carmaker.

“We have suggested some meaningful conditions to acquire SsangYong,” a Ssangbangwool spokesman said without elaborating.

SsangYong plans to select the final bidder in the stalking horse bid, in which the preliminary bidder suggests its price for SsangYong ahead of the auction, and other bidders submit their prices in the auction.

In May, SsangYong selected a local consortium led by chemical-to-steel firm KG Group as the preliminary bidder for SsangYong.

KG and Pavilion PE formed a consortium after submitting letters of intent.

But SsangYong and EY Hanyoung accepted the KG-led consortium as the preliminary bidder as the consortium beat others in terms of the acquisition price, fundraising plans and employment guarantee period.

The court extended the deadline for SsangYong to find a new owner and submit a new restructuring plan by six months until Oct. 15.

SsangYong aims to select a preferred bidder at the end of June, sign a deal in early July, submit its rehabilitation plan to the court in late July and obtain the court’s approval for its restructuring plan in late August.

China-based SAIC Motor Corp. acquired a 51 percent stake in SsangYong in 2004 but relinquished its control of the carmaker in 2009 in the wake of the global financial crisis.

SsangYong has been under court receivership since April 15, 2021, after Mahindra failed to attract an investor amid the COVID-19 pandemic and its worsening financial status.

SsangYong’s lineup consists of the Tivoli, Korando, Rexton and Rexton Sports SUVs. It plans to launch the all-new Torres SUV in the domestic market next month and export it initially to Chile later this year.

Trading of SsangYong shares has been suspended since Dec. 21, 2020. KPMG Samjong declined to offer its opinion for its 2021 financial report due to snowballed losses. SsangYong posted net losses for six consecutive years through 2021.