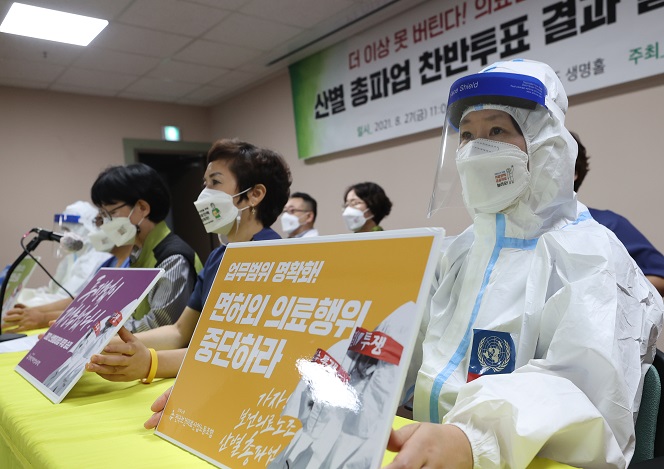 SEOUL, Aug. 27 (Korea Bizwire) — Unionized health workers will go on strike next week to demand better working conditions and the expansion of public health infrastructure amid the pandemic, their union said Friday, raising concerns over a workforce shortage in hospitals as South Korea is battling the worst wave of COVID-19.

The Korean Health and Medical Workers’ Union (KHMU) said 82 percent of 56,091 members from 124 hospitals and treatment facilities cast their ballot, and nearly 90 percent of them voted in favor of the strike.

The union said its members, excluding essential workforces in emergency rooms, delivery rooms and intensive care units, will stage a walkout across the nation on Sept. 2.

Nurses and care workers at hospitals designated for COVID-19 treatment and testing centers will attend the strike, it said, which could complicate health authorities’ efforts to fight the pandemic.

The union has demanded the government improve the working conditions of health care workers and increase the number of public hospitals and their medical personnel, but it failed to narrow differences despite rounds of meetings with health authorities, as well as ruling and opposition lawmakers.

Their move comes as a growing number of nurses in public health clinics have quit or taken temporary leave since last year due to cumulative fatigue and mental stress amid the prolonged pandemic.

Front-line nurses and care workers have been touted as the unsung heroes of the pandemic, but a growing number of them are suffering from burnout due to the chronic shortage of nurses and insufficient benefits despite tight schedules.

On Friday, South Korea added 1,841 more COVID-19 cases, raising the total caseload to 245,158, according to the Korea Disease Control and Prevention Agency (KDCA).

Despite six weeks of the toughest restrictions in the greater Seoul area, the fourth wave has shown no signs of abating as the delta-driven infections have complicated antivirus measures.