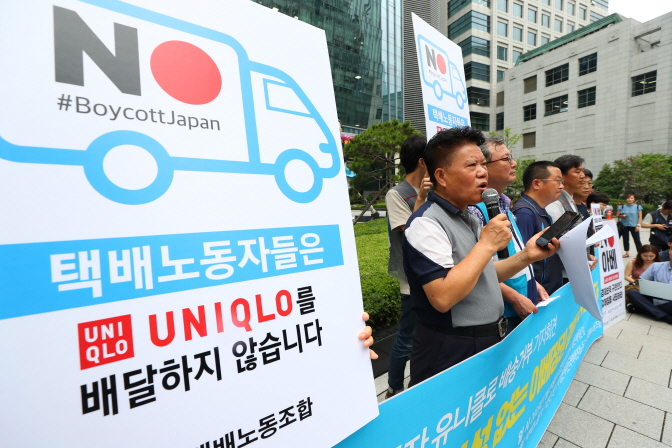 In a news conference in front of the Japanese Embassy in central Seoul, the delivery workers’ union said its boycott campaign will begin with goods from Japanese clothing apparel company Uniqlo. (Yonhap)

SEOUL, Jul. 24 (Korea Bizwire) — South Korea’s delivery service and market workers who are affiliated with the Korean Confederation of Trade Unions, a militant labor umbrella group, on Wednesday declared their participation in the ongoing nationwide boycott of Japanese products.

A boycott of Japanese products has been spreading among Korean consumers after Japan began applying export curbs on South Korea for three key materials needed for the production of chips and displays on July 4 in apparent response to Seoul’s handling of a wartime forced labor issue.

In a news conference in front of the Japanese Embassy in central Seoul, the delivery workers’ union said its boycott campaign will begin with goods from Japanese clothing apparel company Uniqlo.

The union said its members will now refuse to deliver all Uniqlo products to condemn the Abe government’s export curbs against South Korea.

Under the boycott campaign, parcel delivery workers will also upload photos of their refusal to deliver Uniqlo goods to social media, it said, adding an anti-Japan sticker will be attached to their delivery trucks.

Uniqlo has drawn criticism from Korean consumers after a top executive downplayed an anti-Japan boycott in South Korea on July 11, though the company issued apologies later.

The Korean Mart Labor Union held a separate press conference at Seoul Station, vowing that its affiliated workers at the nation’s three major retailers — E-Mart, Lotte Mart and Homeplus — will now refuse to give customers guidance on Japanese products.

The market labor union also asked the three major retailers to suspend sales of Japanese products at their outlets nationwide.