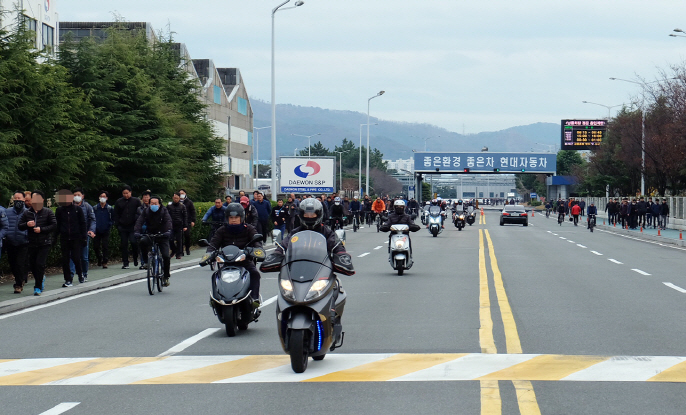 Hyundai Motor’s unionized workers leave the automaker’s main plant in Ulsan on Dec. 6, 2018, after curtailing their morning shift work by two hours in protest of the Gwangju work project. (Yonhap)

Hyundai’s morning-shift workers left the assembly lines at the automaker’s Ulsan, Jeonju and Asan plants at 1:30 p.m., two hours earlier than the scheduled end of their shift.

The company’s afternoon-shift workers are also to shorten their working hours by two under the instruction of the union leaders.

The walkouts came as Hyundai has nearly completed talks with a local government to build a new assembly plant in Gwangju, about 330 kilometers south of Seoul, and hire up to 12,000 employees at half the wages the automaker’s workers currently receive at its main plant in Ulsan. The Gwangju government is to offer incentives and subsidies to the new plant capable of producing up to 100,000 vehicles a year.

But the talks have been stalled as the labor circles refused to accept a tentative agreement to defer collective labor agreements until the cumulative output of the Gwangju car factory reaches 350,000 vehicles.

Unionized workers of Hyundai and Kia fear that their jobs could be threatened by the low-paying jobs in Gwangju, as the domestic auto market is saturated.

“Hyundai’s management may reopen talks on the Gwangju car plant anytime under pressure from the government and the municipality of Gwangju. The union wants to display its determination for the abolition of the Gwangju project through today’s partial strikes,” a union official said.

He warned that the workers will stage additional walkouts if there are any signs of additional negotiations between Hyundai and the Gwangju government.

The Korean Confederation of Trade Unions, a militant umbrella union, has issued a statement denouncing the Gwangju work project as a scam and threatening to take the case to the International Labor Organization.