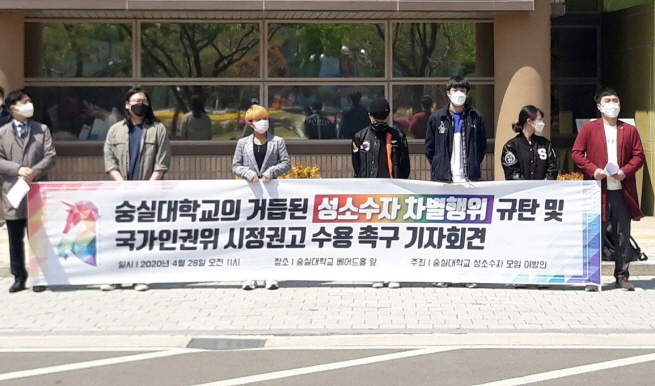 Stranger, a group of sexual minorities at the school, held a press conference on campus Tuesday to denounce the school’s repeated sexual minority discrimination and urge the commission to implement its recommendations for correction. (image: Stranger)

SEOUL, April 29 (Korea Bizwire) — At Soongsil University, another school conflict is brewing, this time over the installation of a banner with the phrase “sexual minority.”

The university did not follow the recommendation of the National Human Rights Commission of Korea (NHRCK), South Korea’s human rights watchdog, to correct an earlier decision and allow students to hang related banners.

Stranger, a group of sexual minorities at the school, held a press conference on campus Tuesday to denounce the school’s repeated sexual minority discrimination and urge the commission to implement its recommendations for correction.

“Last year, the school’s ban on the posting of banners was an act that officially required sexual minorities to not reveal their existence,” the Soongsil University Queer Club pointed out.

Stranger then claimed that the school should show an active will to accept the recommendation of the NHRCK and create an environment where diversity is respected, not a show of shame.

Conflict over the installation of banners between university and the Queer Club date back to February of last year.

At that time, Stranger tried to post a banner on the campus saying, “Welcome to all the sexual minorities and non-sex minorities who came to Soongsil!” but the school refused to allow it.

The school explained that since it is a Christian university, it was difficult for administrators to allow events related to sexual minorities considering the Christian spirit.

In response, Stranger filed a petition with the NHRCK, calling the school’s actions “discriminatory.”

The NHRCK recently ruled in favor of Stranger, advising Soongsil University to stop its ban on the posting of banners on sexual orientation grounds.

However, the school has not given any answer as to whether it will accept the recommendation.