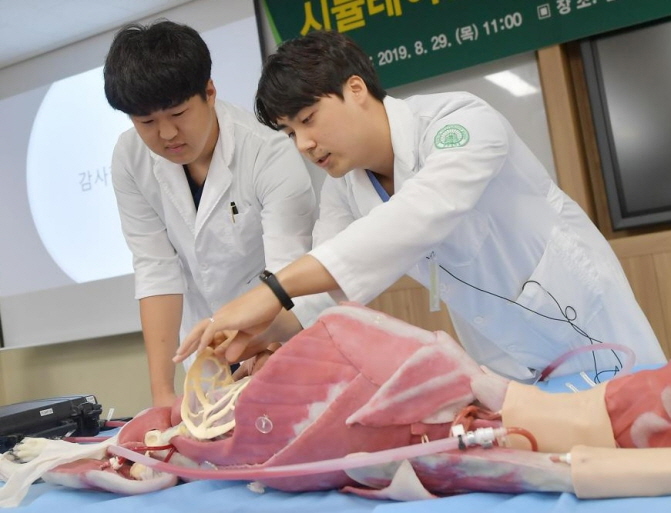 Konkuk University’s College of Veterinary Medicine announced on Tuesday that it will introduce artificial animal models for anatomy classes starting in the fall semester.

The models include those manufactured by Syndaver, a leading manufacturer of animal models, that come with elaborate anatomical structure as well as the texture of organs and blood circulation of dogs and cats.

The models can be used for sutures, venipuncture, intubation, and listening to lung sounds.

“The models can’t be used in all classes since the students need training with real animals, but we plan to use more models in the future,” said Prof. Ryu Young-soo, dean of the college of veterinary medicine.

Animal protection groups welcomed the university’s recent decision to move on from past practices of using real animals in classes that left room for possible animal abuse.

“There were cases where animals used in classes were supplied from dog markets, and were used in various experiments including forced impregnation,” explained Cho Hee-kyeong, president of the Korean Animal Welfare Association.

“We welcome Konkuk University’s decision and hope that the college of veterinary medicine will step up to protect animals and their rights.”

“We needed to come up with a solution to provide repetitive and elaborate opportunities of education to students while minimizing animal sacrifice,” said Prof. Yoon Hun-young from the veterinarian college.

“We will work hard to pull off a successful means of clinical education using the models.”

One thought on “University Replaces Animals with Models for Veterinarian Courses”