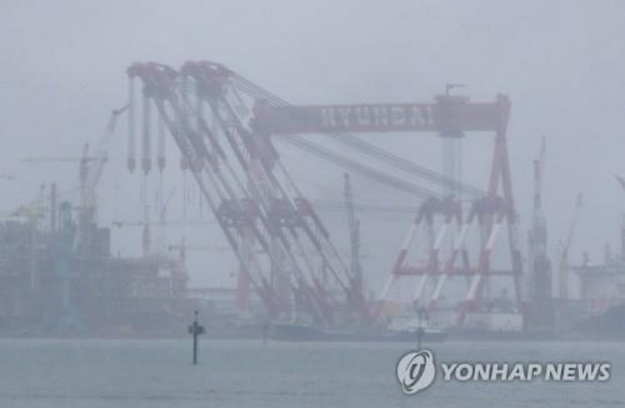 Changwon National University, which launched its Department of Naval Architecture and Marine Engineering in 2008, is suggesting that students look for employment in other industries for now, and wait until the shipbuilding market rebounds. (image: Yonhap)

CHANGWON, July 18 (Korea Bizwire) – As the shipbuilding industry in Korea suffers through a catastrophic slump, some universities in South Gyeongsang Province that offer majors related to shipbuilding are having difficulty maintaining their programs.

Due to the recent economic downturn, the employment outlook in the shipbuilding industry, which was bright just a few short years ago, is now dismal. As a result, new grads or students who are about to graduate with degrees in shipbuilding are deeply concerned about finding jobs.

Popular shipyards in Korea including Samsung Heavy Industries and Daewoo Shipbuilding & Marine Engineering have cut back on recruiting as they go through restructuring, and are even transitioning to smaller workforces.

Changwon National University, which launched its Department of Naval Architecture and Marine Engineering in 2008, is suggesting that students look for employment in other industries for now, and wait until the shipbuilding market rebounds.

As such, many students are postponing their job searches, and instead looking into acquiring international certification as marine plant quality specialists or studying foreign languages to become more competitive in the job market.

Because students are being thrown into an anemic job market, universities are downsizing programs to avoid further struggles for both students and faculty. The International University of Korea decided not to accept any more incoming students for its naval architecture and ocean engineering program that was established four years ago, effectively shutting down the program.

“If the economic downturn continues at this rate, regional or smaller institutions have no choice but to downsize their programs. Marine engineering is one of the industries in which South Korea has global competitiveness, thus everyone in academia and the professional world must realize that fostering a future generation workforce must be seen as a long-term project, despite the dwindling employment prospects,” said an official from one of the marine engineering faculties.