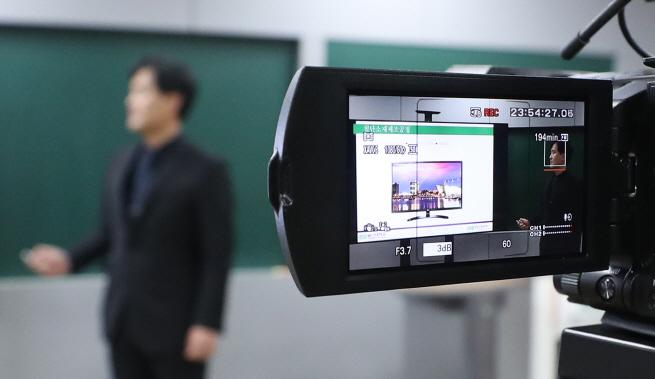 A university professor records his lectures in one of the school’s lecture rooms on March 12, 2020.

SEOUL, March 26 (Korea Bizwire) — The Ministry of Education said Wednesday it is considering introducing online classes nationwide, if the ongoing spread of the coronavirus outbreak shows little sign of letting up or students and faculty members get infected.

However, the education community is voicing concern that local school sites do not appropriate systems in place and lack preparation for online classes.

According to a research report by the Korea Institute for Curriculum and Evaluation, many countries affected with the spread of COVID-19 recently announced plans to conduct classes online.

However, it remains to be seen whether South Korea can do the same.

According to an analysis of data from Organization for Economic Cooperation and Development (OECD), conducted by a team from the Korea Education and Research Information Service (KERIS), South Korean students ranked the lowest among OECD member states for utilizing digital devices.

The researchers suggested that “students in Korea have very little experience in communicating with others or discussing them using digital devices.”

Furthermore, there are no programs where teachers and students can communicate with each other in real time.

Some suggested that the American videoconferencing service Zoom could be used.

However, there is a high possibility that the private program will result in unstable connections depending on the company’s situation.

The KERIS report also pointed out that the tools of video conferencing usually have problems in a situation when one communicates with a large number of other people, such as network delays, video quality degradation and data transfer delays.

In addition, at least 130,000 underprivileged students have no smartphones or computers at home.

The government should also consider the possibility of the disabled being left out and that conducting classes online could be a violation of their right to education.

“A student with impaired hearing needs to see the shape of his or her teachers’ mouth to see the content in general, but online lectures often show only a blackboard on the screen,” a civic group source said.

“In fact, students with developmental disabilities will be neglected at home.”