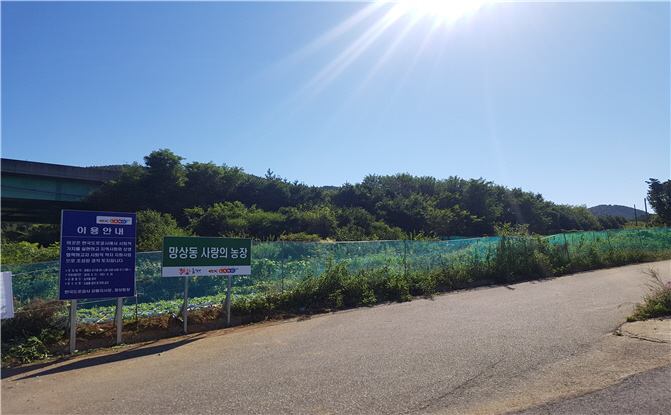 The communal farmland, which spans an area of 1,798 square meters, was created in August, and various vegetables including cabbage are currently being grown. (image: Korea Expressway Corp.’s Gangwon Regional Headquarters)

In addition to the communal farmland that was created in Donghae for those in need earlier in the year, construction of a public parking space for freight trucks in Hoengseong and an animal shelter near the East Hongcheon IC is expected to be completed in May of next year.

The communal farmland, which spans an area of 1,798 square meters, was created in August, and various vegetables including cabbage are currently being grown.

At the end of the year, the harvested vegetables will be used to make kimchi to be shared with the needy.

The public parking lot in Hoengseong is a project that aims to alleviate the shortage of parking spaces for freight truck drivers in the region.

The project will allow for 55 new parking spaces for 5-ton trucks on 2,232 square meters of land.

The land for the project was donated by the Korea Expressway Corp.’s Gangwon Regional Headquarters, and the local government of Hoengseong-gun has been leading the construction efforts.

After the completion of the project expected in November, the government of Hoengseong-gun will operate the parking facility.

An existing animal shelter in Hongcheon-gun will be expanded on a plot of unused land spanning 2,000 square meters situated near the East Hongcheon IC on the Seoul-Yangyang Expressway.

The larger shelter is scheduled to open in May of next year.