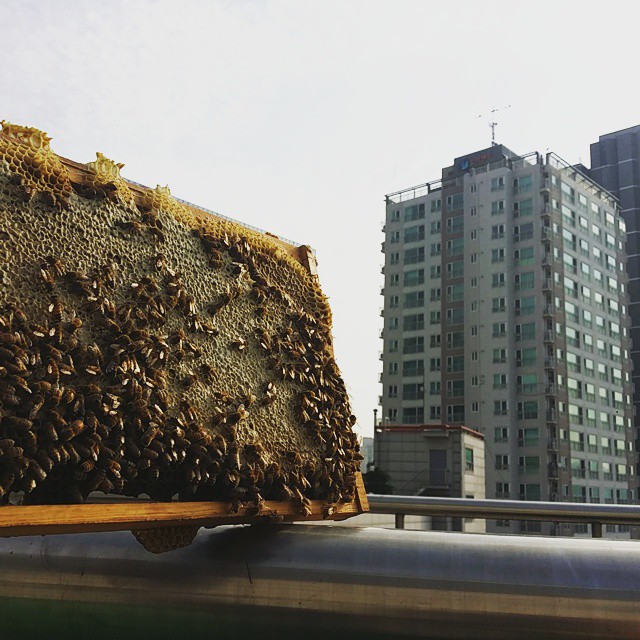 Urban bee farming is a mark of an improved city environment, as bees can only survive in habitats abundant with trees and flowers. (image: Urban Bees Seoul)

A citizen school for bee farming has seen its second term students this year, and apiaries can now be found on the roofs of Seoul’s UNESCO building, a building around Yangjae Station, a Seoul University building and a building on Nodeul Island.

These apiaries are currently producing 5 to 10 kilograms of honey per beehive.

Although some are raising concerns over having bees in the middle of the city, urban bee farming has proven to be safe under certain conditions.

Large international cities have also been raising their share of bees, as more than 20,000 urban bee farmers are actively working at 3,300 apiaries in London alone, while an apiary on the roof of a building in Ginza, Tokyo has started a bee farming boom in Japan. It is reported that the Ginza apiary produced 1 ton of honey last year.

Urban bee farming is a mark of an improved city environment, as bees can only survive in habitats abundant with trees and flowers.

Biological diversity in a city can be also multiplied through bee farming, as bees are important members of the ecosystem.

Researchers can also learn more about a city’s air quality by examining the number of bees in the city.

One thought on “Urban Bee Farming Becoming Popular in Seoul”