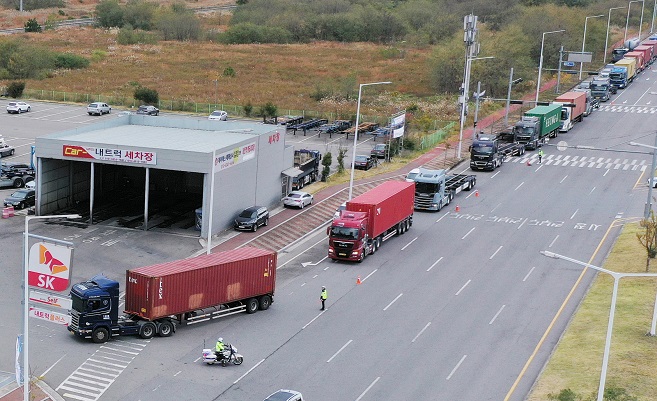 Trucks queue up to buy urea solution at a gas station near a port in the city of Gwangyang, South Jeolla Province, on Nov. 11, 2021, amid a shortage of the product used to reduce emissions in diesel vehicles. (Yonhap)

SEOUL, Nov. 14 (Korea Bizwire) — Truck driver Kim Jeong-seok had never imagined that urea solution, normally a cheap and easy-to-buy item used in his diesel vehicle, would slip out of his reach, creating a scarcity that has threatened his livelihood and exposed vulnerabilities in South Korea’s supply chain.

The shortage of urea solution — the first of its kind in South Korea — has prompted truck drivers to queue up at gas stations in many parts of the country to buy the diesel exhaust fluid used to reduce emissions in diesel vehicles.

“I am running out of the fluid, but even finding some at the current price level is far from easy,” Kim complained. “I and many of my colleagues are on the verge of stopping our trucks. My everything, including my three children, hangs on this.”

The situation highlighted supply chain vulnerabilities in South Korea, which has long relied heavily on China for urea and other key industrial materials.

South Korea said 97.6 percent of its urea imports came from China in the first nine months of this year, up from 88 percent in 2020.

China has not yet lifted restrictions imposed on urea since mid-October, as a short supply of coal, from which urea is extracted, has led to an energy crisis. Beijing recently said it will go ahead with inspection processes on 18,700 tons of urea for export to South Korea.

China has suffered shortages of coal since it banned imports of Australian coal in 2020 in retaliation for Australia’s joining of the Quad, the U.S.-led regional forum largely seen as an anti-China grouping.

Another truck driver, surnamed Lee, said he bought urea solution after waiting for about three hours.

“I am quite relieved now,” he said. “But the amount is still for two weeks of use. If I am forced to stop my car and fail to keep up monthly installation for my truck, it will be seized and put up for auction.” 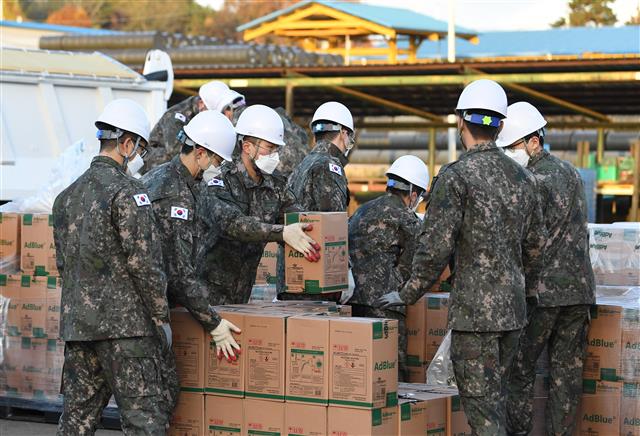 Soldiers move boxes of urea at the Army’s First Logistic Support Brigade in Goyang, north of Seoul, on Nov. 11, 2021, to provide them to the civic sector suffering a severe supply shortage due to China’s sudden export curbs, in this photo provided by the Korea Defense Daily.

South Korea airlifted 27,000 liters of urea solution from Australia on Thursday in a series of frantic efforts to avert a logistics crisis.

The government said it plans to also import urea and its solution from Vietnam, Saudi Arabia and other nations, a move that will double South Korea’s current two-and-a half month inventory to a more than five-month stockpile.

Experts have warned that the supply crunch could not only deal a blow to the logistics industry but have far-reaching implications on the economic recovery from the pandemic.

A recent poll conducted by the Korea Confederation of Trade Unions showed 32.4 percent of 253 construction workers said that they have not been able to operate their equipment due to supply shortage of urea solution.

The agricultural sector has also experienced shortages of urea-based fertilizers and the solution for agricultural machinery amid soaring prices.

The import unit price of agriculture-use urea more than tripled to over $1,000 per ton this month from the end of last year, according to the country’s fertilizer association.

“Any logistics disruptions will affect overall manufacturing and production sectors, which could deal a further blow to exports. If such a shortage continues, it could also push up prices and hurt consumer confidence,” Jung Kyu-Chul, an official of the state-run Korea Development Institute, said.

Adding to the woes is the reality that urea is not the only item that has a single-source supply chain, and there have been ample warning signs of shortages.

South Korea imported more than 3,900 out of 12,586 products, or 31 percent of its total import items, from a handful of countries, such as the United States, Japan and Germany, in the first nine months of this year, according to data by the Korea International Trade Association.

South Korea relied on China for imports of 1,850 out of 3,900 items, including several key industrial-use materials, such as magnesium, lithium hydroxide and rare earth elements.

“As we’ve already experienced through Japan’s export restrictions, heavy dependence on specific nations can make our economy quite vulnerable. Even natural disasters or a pandemic in certain regions could cause supply disruptions and affect our industry as a whole,” Yeon Won-ho, a research fellow at the Korea Institute for International Economic Policy, said. 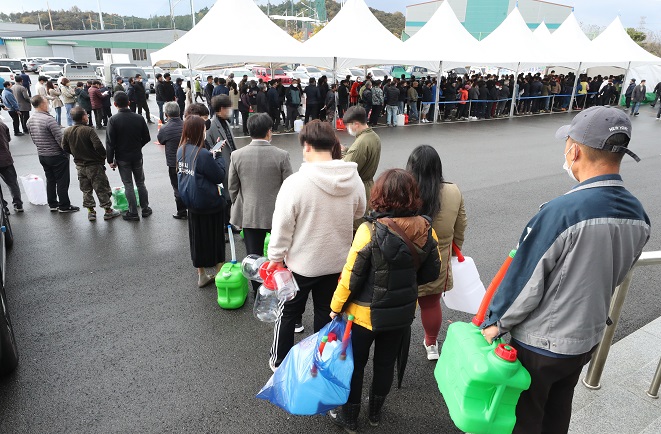 People stand in line to buy urea water solution at an indoor gym in Iksan, North Jeolla Province, southwestern South Korea, on Nov. 9, 2021, amid the nationwide supply shortage of the material, which is used in diesel vehicles to reduce emissions, due to China’s sudden export curbs. (Yonhap)

“Now is time to carefully review each supply chain of major industry items to diversify import channels, as we are facing growing uncertainties due to an intensive Sino-U.S. rivalry, climate challenges and other factors,” Yeon added.

Others have called on the government to seek measures to domestically produce key materials, such as giving subsidies to local firms, if necessary, rather than focusing only on price competitiveness.

Currently, the government has 338 items on its list of special supply management, most of which require advanced technologies for development and whose supplies rely heavily on foreign countries.

In the fallout of the urea case, the government is pushing to add more items to the list, which are closely linked to everyday lives of the people and have ripple impacts on the economy, regardless of their technological requirements, the industry ministry said.

“The government will check supply and demand of those items on a real-time basis so as to detect signs of any issues in advance and come up with responses swiftly,” First Vice Industry Minister Park Jin-kyun said.