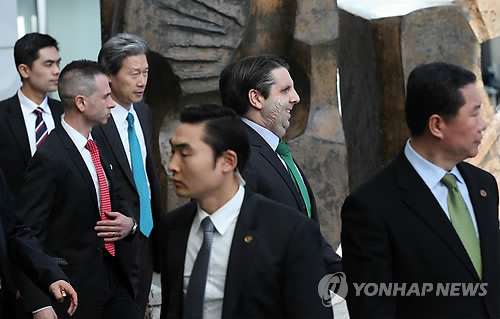 On March 10, staffers from the US Embassy searched through belongings left by reporters and journalists in the conference hall of Severance Hospital around lunchtime, ninety minutes prior to the scheduled press conference.(image :Yonahap)

SEOUL, March 11 (Korea Bizwire) – The US Embassy drew strong opposition from Korean journalists by searching their possessions without consent before a press conference featuring Ambassador Mark Lippert, which took place prior to his discharge from Severance Hospital.

On March 10, staffers from the US Embassy searched through belongings left by reporters and journalists in the conference hall of Severance Hospital around lunchtime, ninety minutes prior to the scheduled press conference.

At the scene, a Korean police officer questioned the actions of the embassy staff by saying “Personal belongings should only be searched with the consent of the owners”, leading an embassy public relations officer to seek consent from those present.

However, many journalists who had left the hall for lunch discovered that their belongings had been searched without their consent, and expressed strong opposition to what they considered to be reckless actions on the part of the embassy.

Embassy officials confiscated a small utility knife from a reporter during the search, and returned it after the press conference.

Following the press conference, the hospital explained that the embassy sent a notification email regarding security procedures to reporters that morning, but only a few members of the media received the message.

Before the press conference, police mobilized a metal detector at the request of the embassy, and conducted body searches on all the people entering the hall, including reporters and hospital staff.

When asked to comment on the incident, a public relations officer from the embassy refused to elaborate, saying, “I don’t know as it is related to security matters.”