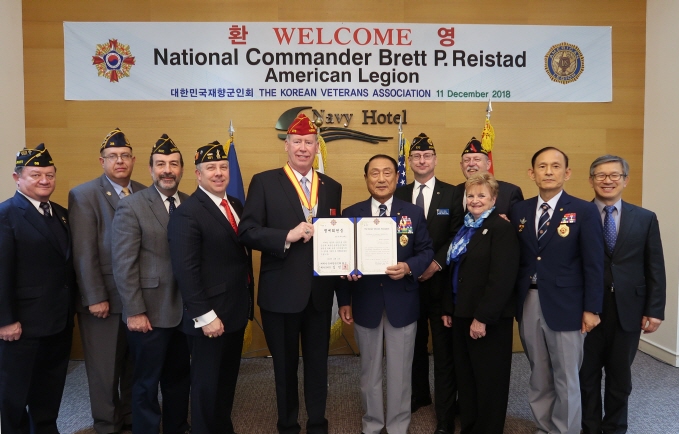 Kim Jin-ho, President of the Korean Veterans Association, met with the AL delegation led by Brett Reistad in Seoul to discuss the way ahead for future exchanges.

“We would like to ask the American Legion to support us in our journey to denuclearize North Korea and establish permanent peace on the Korean peninsula,” said Kim.

Reistad replied, “the United States and South Korea have maintained a close relationship based on shared values of free democracy and market economy, for which we will do our best to strengthen the ROK-US alliance.”

After hearing about the fundraising project led by the Korean Veterans Association to build a memorial wall at the Korean War Veterans Memorial in D.C., Reistad promised to ask the members of the American Legion to support the initiative.

The memorial wall will be installed near the Pool of Remembrance, and will be a circular glass wall 50 meters wide and 2.2 meters tall.

The wall will carry inscriptions of the names of 36,000 American heroes and 8,000 Korean soldiers (KATUSA) who fell during the Korean War. The wall is expected to cost 28 billion won (US$2.49 million).

Brett P. Reistad, National Commander of the American Legion, first acquired AL membership after fighting in Vietnam back in 1974.

He has since served 26 years as a police officer, and began working full-time for the American Legion in 1981. He was elected president last August.

The American Legion was first established by American veterans of World War I in March 1919. The organization holds 14,000 branch offices and 2.4 million members.

Kim awarded Reistad and his delegation honorary membership in the Korean Veterans Association.