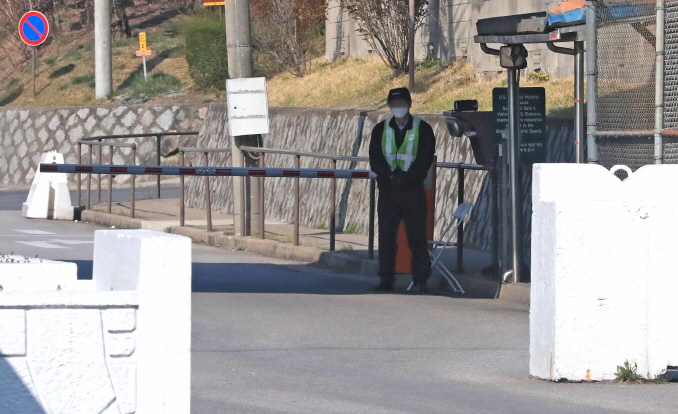 In this file photo, an employee of the U.S. Forces Korea (USFK) is on duty at the entrance of the U.S. Army’s Yongsan Garrison in Seoul on March 31, 2020. (Yonhap)

SEOUL, Jan. 17 (Korea Bizwire) – United States Forces Korea (USFK) on Sunday issued a “shelter in place” directive, ordering part of its service members to remain at home after additional COVID-19 outbreaks were reported inside its barracks.

According to USFK’s Twitter account, the directive dated Saturday requires service members based at Yongsan Garrison in central Seoul and Camp Humphreys in Pyeongtaek, south of Seoul, to stay at home except for necessary activities. It said the directive will expire Tuesday.

The directive cited routine or emergency health care treatment, mission critical operations, food purchases, walking in close proximity of home and several other occasions as “authorized activities” under the shelter-in-place order, saying “remain at home unless conducting one of the activities listed above.”

According to USFK, two of the five cases involve American service members while the remaining cases involve two American and one Korean civilian workers.

All of them have tested positive after coming into contact with COVID-19-positive colleagues inside Yongsan Garrison.

Currently, USFK is conducting an epidemiological investigation into the outbreaks in collaboration with South Korean health authorities.

Since the first COVID-19 case was confirmed inside Yongsan Garrison on Jan. 5, a total of 25 people there have tested positive for the virus.

One of them tested positive last Thursday after visiting Yongsan Garrison, sparking alarm over the potential spread of the virus at the service member’s residence in Camp Humphreys.

As of Sunday, the accumulated COVID-19 cases involving the broader USFK community across the country stood at 601.