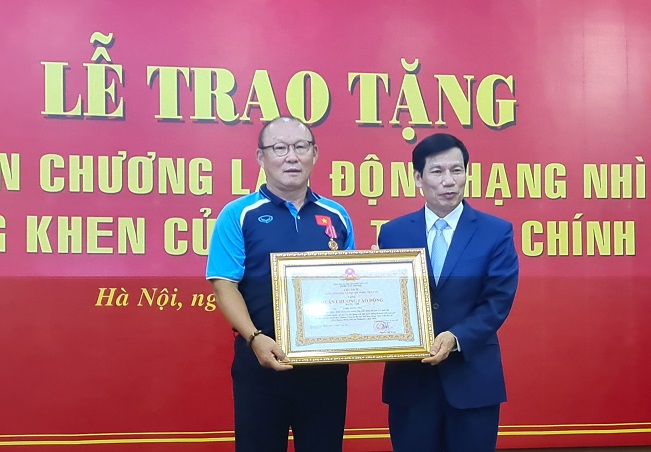 Park Hang-seo (L), the South Korean head coach of the Vietnamese men’s national football team, receives the second class Order of Labor from the Vietnamese government at a ceremony at the Vietnam Football Federation headquarters in Hanoi on Aug. 27, 2020. (Yonhap)

HANOI, Aug. 27 (Korea Bizwire) — Park Hang-seo, the South Korean head coach of the Vietnamese men’s national football team, has received a state badge of honor for his accomplishments in his adopted home.

The Vietnamese government bestowed the second class Order of Labor upon Park at a ceremony at the Vietnam Football Federation headquarters Thursday.

This award is given to individuals with outstanding achievements in labor, creativity or national construction. Park is the first foreign national to receive a Labor Order in Vietnamese football.

Park has worked magic with both the senior men’s and the under-23 men’s teams in Vietnam since taking over in October 2017.

Park’s most recent highlight came at the Southeast Asian (SEA) Games in December, when Vietnam won their first-ever gold medal in men’s football.

Previously, Park coached Vietnam to a runner-up finish at the Asian Football Confederation (AFC) U-23 Championship in January 2018, and also to the semifinals at the 2018 Asian Games.

Vietnam won the 2018 Suzuki Cup title over Malaysia for their first regional championship in 10 years.

And at the AFC Asian Cup in January 2019, Vietnam reached the quarterfinals for the first time in a dozen years. 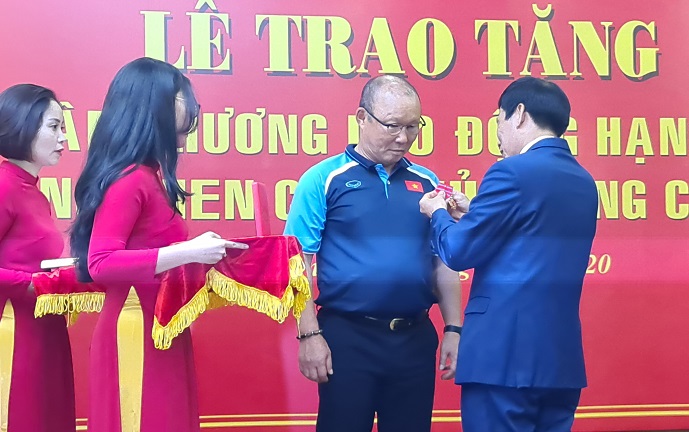 Park Hang-seo (2nd from R), the South Korean head coach of the Vietnamese men’s national football team, receives the second class Order of Labor from the Vietnamese government at a ceremony at the Vietnam Football Federation headquarters in Hanoi on Aug. 27, 2020. (Yonhap)

Under Park’s tutelage, Vietnam are also trying to qualify for their first FIFA World Cup. In the second round of the Asian qualification, Vietnam are leading Group G with 11 points, two better than Malaysia.

The eight group winners and the four-best runners-up will reach the third round. The second round matches scheduled for this year have been pushed to next year due to the coronavirus pandemic.

Park had received the third class Order of Labor after Vietnam’s second-place showing at the 2018 AFC U-23 Championship.

Then following the Suzuki Cup title, Park earned the Friendship Order, given to foreigners who have made contributions to developing friendly ties between Vietnam and other countries.

In November 2019, Park signed an extension with Vietnam — two guaranteed years and an option for a third year. Park made US$240,000 per year on his previous deal, which was to expire in January 2020.

Park’s new deal is reportedly the largest ever for a coach for the Vietnamese national football team.