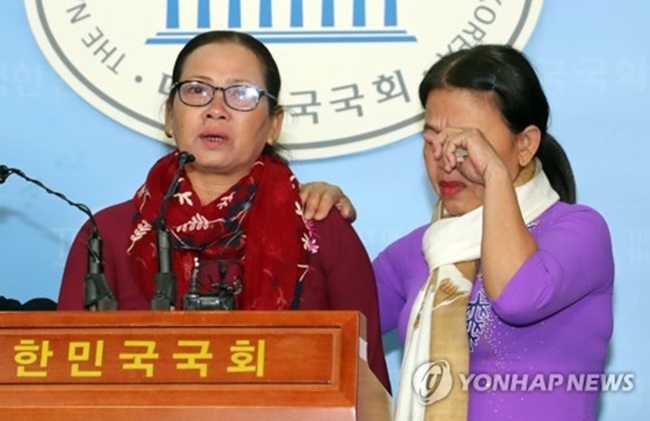 Nguyen Titan, a Vietnamese victim of a massacre during the Vietnam War, speaks during a press conference at the National Assembly in Seoul on April 19, 2018. (Image: Yonhap)

SEOUL, April 19 (Korea Bizwire) – Two Vietnamese victims of South Korea’s wartime misdeeds have called on the Seoul government to apologize and take steps to verify the truth behind the alleged mass killings during the 1960-75 war in their country.

They claimed that they are still haunted by the harrowing memories of their families being killed by South Korean troops deployed to fight in support of the United States during the Vietnam War.

They came here to testify before the “People’s Tribunal” slated to convene in Seoul on Saturday and Sunday. The tribunal, a mock trial designed to look into the incidents, is led by the local progressive civic group, called MINBYUN-Lawyers for a Democratic Society.

“I want to ask … Why did South Korean troops fire guns and threw grenades at our family, then just women and children. Why did you set even our house on fire and bulldozed through dead bodies,” Nguyen Titan, a 58-year-old woman, said during a press conference at the National Assembly.’

She said she was only eight when she lost her mother, sister, brother, aunt and cousin in the shooting.

“I myself had a gunshot wound in my stomach,” she recalled in a tearful, trembling voice.

“Five decades have passed by since the killings, but we don’t know why this happened. … I ask this question on behalf of other victims and their families. Why do the Korean military not recognize this wrongdoing and not apologize?” she said.

Another woman with the same name as Nguyen Titan said that she still vividly remembers the massacre.

“Even today, I still can’t forget the scream and so forth that my mother and brother made while dying,” she said. “I came here to talk about what he suffered from, the truth.”

In March, South Korean President Moon Jae-in made an apparent apology during a meeting with Vietnamese President Tran Dai Quang in Hanoi.

“While we continue to develop our exemplary cooperative relationship, I express my regrets for the unfortunate history between the two countries that remains in our minds and hope the two countries will join their efforts to increase their future-oriented cooperation,” he said.