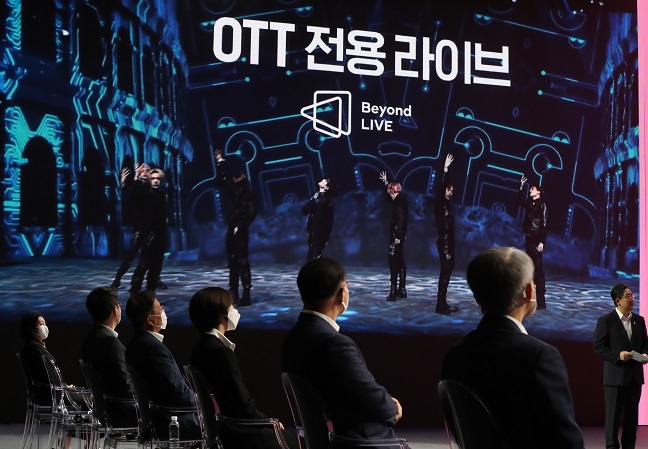 Culture Minister Park Yang-woo (R) delivers a presentation on the government’s “Digital New Deal Cultural Content Industry Growth Strategy” at a briefing held on Sept. 24, 2020, at the concert venue of Camp One in Gimpo, west of Seoul. (Yonhap)

SEOUL, Sept. 24 (Korea Bizwire) — The government said Thursday it plans to create a facility that specializes in the live streaming of music concerts and launch projects aimed at supporting the domestic content streaming industry.

The plans were announced by the culture ministry as part of culture initiatives within the government’s more broader “New Deal” project, a new signature policy by President Moon Jae-in aimed at creating jobs, revitalizing the economy and preparing for the post-coronavirus era.

The ministry announced its blueprint, the “Digital New Deal Cultural Content Industry Growth Strategy,” at a briefing presided over by Moon at the concert venue of Camp One in Gimpo, west of Seoul.

The government also plans to provide support to small and medium-sized entertainment companies on a trial basis in using the facility.

But the pandemic-driven handicap also provided a golden opportunity, compelling K-pop stars, such as SuperM, BTS, Monsta X and others to venture into the realm of ticketed online shows.

The ministry aims as well to expand tax breaks for domestic streaming platforms and create a government-private sector consultative group to discuss other means of support in the sector. 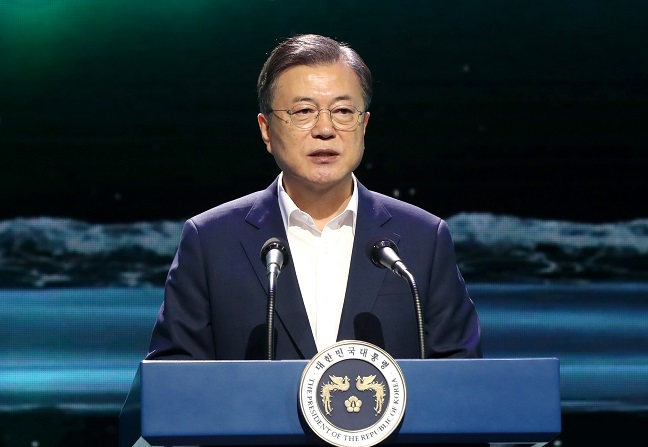 Also announced were broad plans to support production of films, games and webtoons, as well as projects to adopt virtual, augmented, mixed and extended reality software technologies in the manufacturing and medical sectors.

The government also plans to adopt 3-D mapping technologies in the cultural heritage area to preserve digital databases of treasured heritages and use them for future services and preservation initiatives.

The ministry will also create a 35 billion-won fund next year to support culture sector companies that have suffered financially due to COVID-19.

“Now is the golden time to grow the competitiveness of the digital content industry by uniting our digital capacity and our culture competency represented by ‘hallyu,’” President Moon said, using the term referring to the global popularity of Korean pop culture.

Moon also added that the government will invest over 330 billion won by 2025 to promote growth in the sectors of augmented and virtual reality, and develop and procure core technologies in the fields.

“Despite the content industry facing difficulties due to COVID-19, we will work proactively with related ministries in providing support so that Korean content can be spread throughout the world,” Culture Minister Park Yang-woo said.