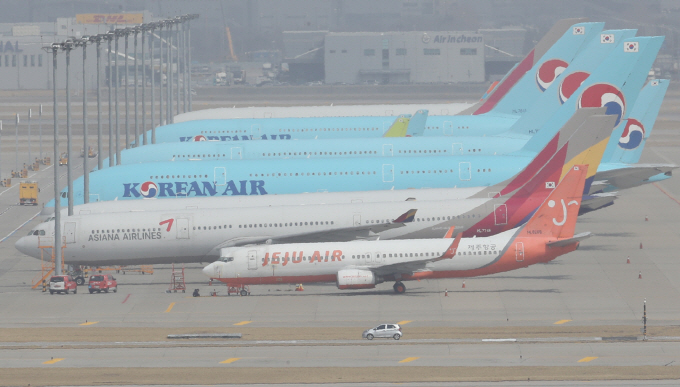 The spread of the respiratory disease, whose first confirmed case in South Korea was reported on Jan. 20, has halted almost all flights to and from South Korea, cut the number of train passengers in half and made a big dent in vehicle traffic on highways.

According to the data that Rep. An Ho-young of the ruling Democratic Party received from five state firms, Incheon International Airport Corp. (IIAC) is expected to see its annual revenue drop by nearly 566 billion won (US$456 million) in the wake of the coronavirus outbreak.

The corporation had originally estimated the number of international passengers using the airport at 72.54 million for this year, but the COVID-19 outbreak has forced it to slash the figure by 58 percent to 30.82 million.

IIAC, the operator of South Korea’s main gateway Incheon International Airport, is forecast to switch to a loss starting in March should the coronavirus crisis continue.

The corporation estimated its full-year bottom line to decline by some 118 billion won even if the virus outbreak comes to an end in April.

Seven airports in South Korea, excluding Incheon International Airport, provided more than 2,400 weekly flights on 106 routes to and from 13 countries before the outbreak, but the number has plunged to 74.

The situation is also bad for Korea Railroad Corp. (KORAIL), which operates South Korea’s railway and bullet trains, called KTX, across the country.

The number of train passengers is projected to sink 55.6 percent on-year to 57.14 million in March should the country maintain its virus alert at the highest level.

SR Co., which operates the Super Rapid Train (SRT), forecast passenger demand to drop by up to 5.7 million depending on the duration of the coronavirus outbreak, with its revenue falling by up to 155 billion won.

The Korea Expressway Corp. (KEC), which manages South Korea’s highways across the nation, has also been hit hard by the outbreak of the novel coronavirus.

The corporation’s toll revenue amounted to 423 billion won between Jan. 20 and March 6, down 10.6 percent from the same period a year earlier.

Over the cited period, sales at rest stops nationwide tumbled approximately 27 percent to 148.3 billion won, according to the data.

So far, the new coronavirus has claimed 81 lives and infected more than 8,300 South Koreans, with some 1,400 patients recovering fully.