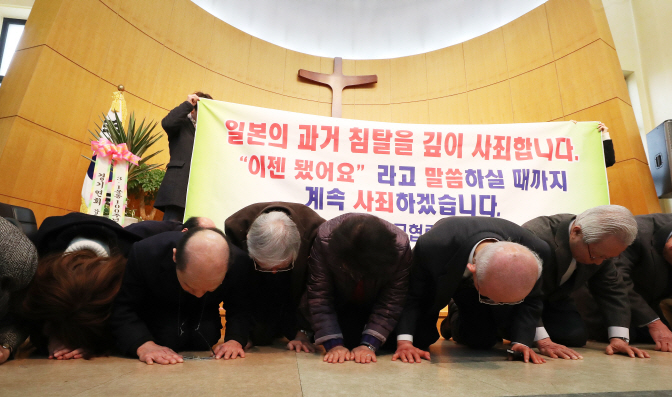 A group of 17 Japanese Christians led by Rev. Reiji Oyama bow down on the floor of a chapel at the Jeam-ri Protestant Church in Hwaseong, Gyeonggi Province, on Feb. 27, 2019, to apologize for the April 15, 1919, massacre of Jeam-ri villagers by Japanese colonial forces. (Yonhap)

HWASEONG, Feb. 27 (Korea Bizwire) — A group of 17 Japanese Christians on Wednesday visited the historic site of a 1919 church massacre by the Japanese police force and army troops and apologized for the incident on behalf of their country.

The trip was made to mark the 100th anniversary of the March 1, 1919, independence protests and the massacre at the Jeam-ri Protestant Church in Hwaseong, Gyeonggi Province, the following month.

“Lord, this church is where the worst case was committed by Japanese officials during the colonial period,” Rev. Reiji Oyama, who led the group, said in his prayer at a memorial built on the site.

“Japan at that time tortured and killed the villagers and set the church on fire just because they took part in the March 1 independence movement.”

Historians say about 2 million protesters took part in the series of anti-Japan rallies held across the country and abroad from March to May 1919.

On April 15 that year, the Japanese shot to death 20 innocent villagers of Jeam-ri after locking them in the church in an apparent retaliation against a fierce anti-Japanese demonstration held in the town.

The three-month movement ended in failure due to brutal crackdowns by Japan but had a great influence on efforts by other countries to achieve liberation from imperialist powers. Korea was under Japan’s brutal colonial rule from 1910 to 1945.

Oyama, 93, reproached Japanese politicians for refusing to properly apologize for the past.

“Japanese politicians, however, have never apologized for this. It’s natural to apologize if you do something wrong. Lord, please forgive us, Japanese people,” the pastor said.

The Christian devotees who were praying together then began to weep as they shared their heartfelt condolences for the victims.

After the prayer, the Japanese watched a 17-minute video on the Jeam-ri massacre and listened to a testimony from a senior Korean pastor on the incident at a chapel that sits next to the memorial.

The visitors bowed down to the floor of the chapel. Some held a Korean-language banner reading “We deeply apologize for Japan’s colonization of Korea. We’ll keep apologizing until you say ‘Now that’s enough.’”

“I first visited here to make an apology in 1967 and came back with other believers because I wanted to make another apology timed for the 100th anniversary of the March 1 Movement and the April 15 Jeam-ri massacre,” he said. “I hope Koreans will remember that there are Japanese people who apologize for the incident,” he added.

The group later tried to convey their apology to Hwaseong Mayor Seo Cheol-mo in a closed-door meeting.

Seo, however, said he could not accept the apology as mayor since the object of the apology should be the victims’ families.

“I will let Japanese society and the government know what I felt as I looked around the scene. I will make more efforts to have the Japanese government make a proper apology,” the Japanese pastor said.

The visitors are scheduled to return home after holding another prayer meeting for the massacre victims at a Protestant church in Yongin, just south of Seoul, on Wednesday night.