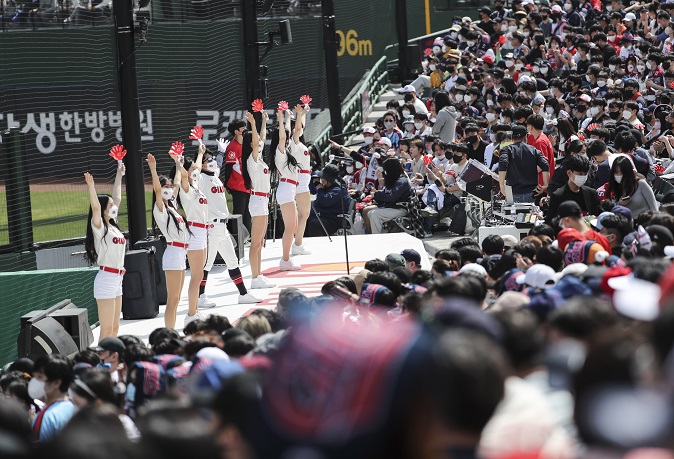 In this file photo from April 10, 2022, cheerleaders for the home team Lotte Giants perform on the stage during a Korea Baseball Organization regular season game against the Doosan Bears at Sajik Stadium in Busan, some 450 kilometers southeast of Seoul, on April 10, 2022. (Yonhap)

The Korea Baseball Organization (KBO) announced Friday the two-year ban on vocal cheering at ballparks will be lifted, effective immediately.

The Korea Professional Football League (K League) followed up with the same measure just a few hours later. It will take effect Saturday with two matches in the second-division K League 2.

The KBO had asked the sports ministry earlier this week to remove restrictions on cheering activities.

Beginning Monday, all social distancing rules in place for the COVID-19 pandemic were eased, except for the mask mandate. The KBO had sought to adjust its own health and safety protocols accordingly.

A major part of the KBO fan experience has been to sing along to players’ walk-up songs and chant their names as they step into the batter’s box or take the mound. On home runs, run-scoring plays or key strikeouts, fans also typically yell out players’ names.

However, those activities came to be regarded as dangerous during the global pandemic, on the grounds that they might increase risks of infections via droplets, even with masks on.

Teams continued to employ cheerleaders and cheermasters on stages set up in the first base and third base stands during the pandemic, but fans were allowed to clap or bang inflatable cheering sticks to make noise.

KBO clubs have been struggling to fill their seats despite the absence of a crowd cap, and they believe the ban on cheering has contributed to poor ticket sales in the early going.

The ban has been loosely enforced at times, though. PA announcers would warn fans against them and scoreboards would flash reminders that singing and chanting remained banned, but it has proven difficult to keep inebriated fans quiet in late innings.

The one remaining caveat now is that fans must still keep their masks on when they chant. Doing so sans facial covering and doing so while eating and drinking — activities that require the removal of masks — will be prohibited.

The KBO also asked fans to keep the volume of their voices at a reasonable level.

In another move announced Friday, the KBO said teams will now be able to organize face-to-face events involving fans, such as autograph signings, provided that participants adhere to the mask mandate. 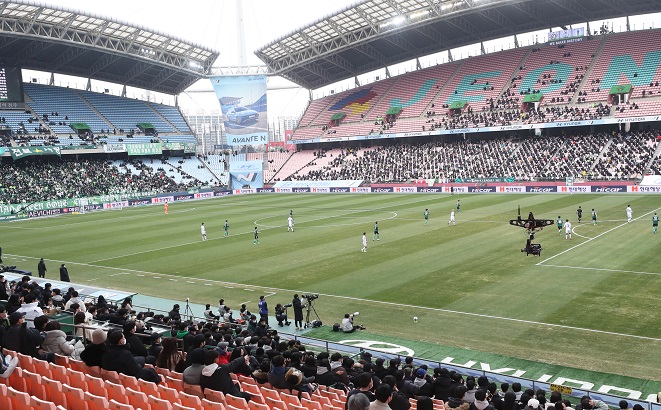 The K League’s measures are virtually identical with the KBO’s. Supporters must keep their masks on when cheering and refrain from making too much noise.

The K League will also allow clubs to set up face-to-face functions with their supporters.

Player mascots — children who walk out to the pitch hand in hand with the players before matches as part of football tradition — will be back in the K League. The pregame ceremony will also see the return of handshakes between the teams.