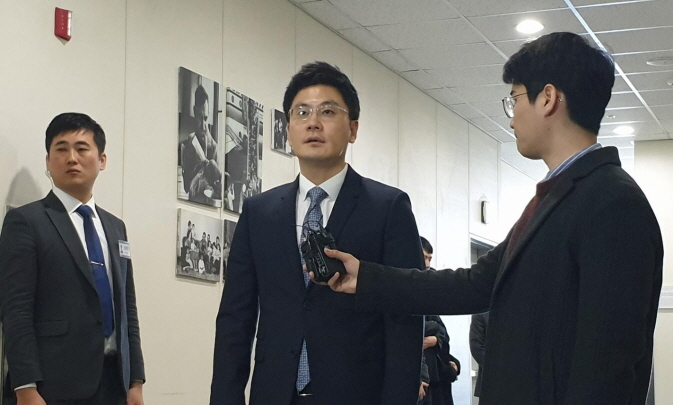 SEOUL, Mar. 22 (Korea Bizwire) — The chief of the management agency of BIGBANG and other K-pop stars said Friday he will faithfully comply with the authorities investigating its suspected tax evasion and an alleged sex-for-favors scandal involving a former BIGBANG member.

Yang Min-suk, chief executive of YG Entertainment, made the remarks to reporters before attending the company’s regular shareholder meeting in Seoul.

“I take those cases very seriously. (I) will faithfully cooperate with the relevant authorities in charge of investigations,” Yang said.

The National Tax Service launched a tax evasion probe into YG Entertainment earlier this week, amid the police’s widening investigation into the sex-for-favors scandal involving Seungri, a former member of BIGBANG.

Last week, YG Entertainment ended its contract with the 29-year-old singer, who was being investigated for allegedly arranging sexual services for potential investors for a nightclub in southern Seoul.

The criminal allegation also led to the shocking revelation that singer Jung Joon-young shared videos of him having sex with women on a mobile group chat room that included Seungri.

Yang told reporters he wishes the ongoing investigations will reveal the truth clearly.

“I hope I will have a chance to speak on additional positions and future plans when comprehensive results are available,” Yang said.

Asked to comment on allegations that a nightclub in western Seoul owned by his elder brother and YG founder Yang Hyun-suk has evaded individual consumption tax by registering its type of business as a restaurant with the tax authorities, the YG chief avoided a direct reply and simply said, “Sorry.”

He said he cannot give further comment on the ongoing tax evasion probe.

The YG head also declined to answer questions about financial losses of the National Pension Service, a YG shareholder, caused by the company’s falling stock prices.

“(I) will do the utmost for the interests of shareholders. Efforts will be made to increase the shareholder value through planned schedules in the future,” he said.

Regarding criticism that the company has been negligent in overseeing its member singers, Yang said he takes his company’s social responsibility seriously.

Strong protests were expected from shareholders over the recent plunge in the company’s stock price, but the meeting proceeded calmly without any particular incident.