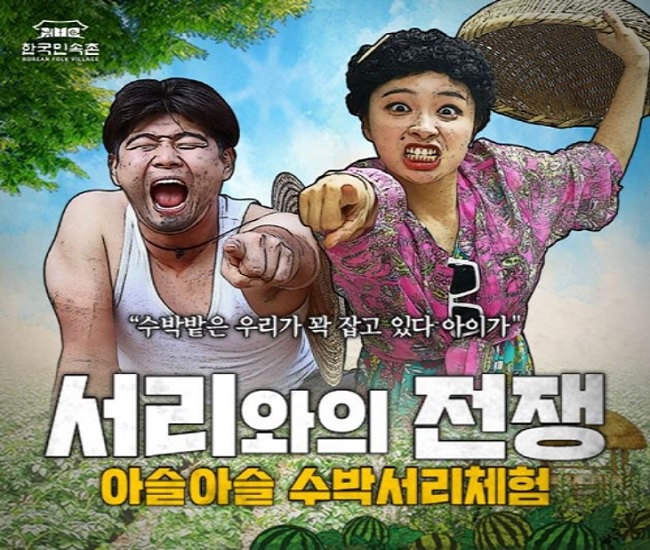 YONGIN, Jul. 25 (Korea Bizwire) — For many, summer conjures images of beaches, water parks and rollercoasters. On the flip side, for others, summer invokes images of stiflingly crowded beaches, pools that are warm because there are too many people standing around and intolerable lines where six hours gets you one ride at Lotte World’s Gyro Drop.

If you find yourself nodding in agreement with the latter, you’re probably ready to try something new. Head on over to the Korean Folk Village in Yongin, where instead of lazing in the sun or sliding down the steepest of water slides, you get to match wits with the village foreman and steal his watermelons.

Take part in a deeply rooted tradition of childhood adventure, where glory (and delicious watermelon) could be yours as you share the spoils of victory with your friends, crouched among the reeds along a hidden riverbank, munching away. Or, if you prefer to take the lay of the land before you make your move, take a seat and amuse yourself by watching the foreman “discipline” captured watermelon smugglers.

You might even become the next viral YouTube sensation. Videos of the bold risk takers have been posted on the Korean Folk Village’s official Facebook page, and had amassed a total of 5.6 million views as of July 24.

The activity has enjoyed explosive popularity, from elder Koreans reliving the antics of their childhood, to foreign visitors keen to immerse themselves in a peculiar but hilarious venture.

While visitors only have until July 27 to take advantage of the opportunity to nab a watermelon, the Korean Folk Village will host a water gun fight starting on July 29, where participants will be able to take up arms against traditional village characters.

While summer activities are ongoing, parents accompanying children under the age of 12 can buy tickets at complimentary discounted prices. Residents of Yongin and the surrounding areas are also eligible for a variety of benefits and discounted prices.

For more details, go to (http://www.koreanfolk.co.kr)