“The organization best suited to change society today is the corporation. To do this, I think the atmosphere in which social impact companies can grow is essential.”

“Social impact companies should be able to achieve financial performance all the while playing the critical role of social change in a single area or system-wide change through innovative ideas.”

“The most visible examples of social impact investment include Wal-Mart that has supplied essential drugs at the cost of $4 a month to those outside the healthcare system and Nestle that has grown its Nespresso business by 26 times by investing $250 million in coffee farmers for ten years.” 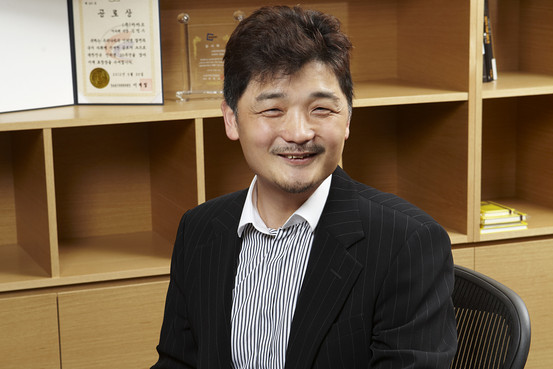 SEOUL, Nov. 25 (Korea Bizwire) — Kim Beom-su, chairman of Daum Kakao, said his company will invest more aggressively in social impact start-ups. Social impact companies are those that achieve financial performance as well as playing the role of social change in a single area or system-wide change through innovative ideas.

In a keynote speech delivered in the “2014 Start-up Nations Summit” held on November 24 in the Sheraton Grande Walkerhill, he revealed his success formulas and start-up business philosophy. This is the first time for Kim to appear in public since the merger between Daum and Kakao Inc. in early October.

In his speech, he talked about TRIZ, or the theory of inventive problem solving, that helped him become more creative in problem solving. He also stressed the importance of out-of-the-box thinking through the examples of Hangame and Daum Kakao at the time of their start-up. He said the biggest success factor that made Kakao the world’s first mobile game platform was not because we thought about “What we should make and how to sell” but about “Whom we should include as members and how to connect them.”

Mr. Kim established Hangame in 1998 and became CEO of NHN in 2000 when his company merged with Naver. He followed up with creating Kakao in 2008 while forming K-Cube Ventures in 2012 to nurture promising tech ventures. Currently his company supports 36 start-up companies and their CEOs.