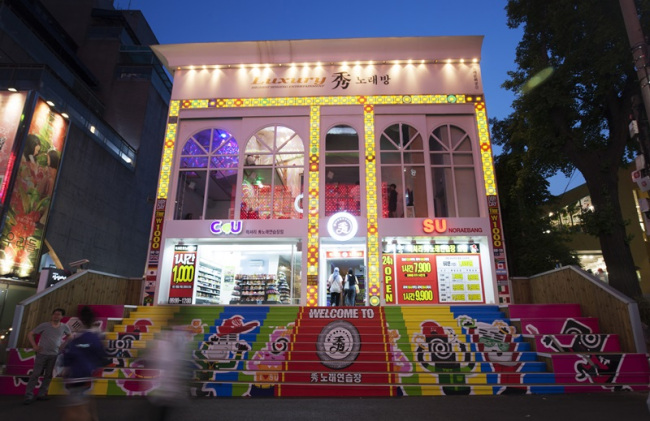 According to CU, the store has proven to be a huge success, with a daily average of more than 1,000 customers since its launch in early July, almost tripling the number for average CU stores. (image: CU)

Located in one of Seoul’s most vibrant and youth-driven areas, Hongdae Street of Youth, the karaoke building houses a CU store on its ground floor, offering over 1,000 different types of food, snacks, and beverages not offered at conventional karaoke franchises. According to CU, the products and their display arrangements were carefully selected via a big data analysis of convenience stores in various entertainment neighborhoods.

The store’s interior design was also differentiated from its conventional counterparts. Disco balls and neon signs were installed, while the latest K-pop music is played to boost the vibe of this karaoke-themed convenience store.

According to CU, the store has proven to be a huge success, with a daily average of more than 1,000 customers since its launch in early July, almost tripling the number for average CU stores.

In fact, the new venture is one of several CU endeavors in which its stores team up with other businesses including restaurants, drugstores, and even banks, with digital kiosks.

“Convenience stores are rapidly changing into multi-functional platforms by collaborating with other industries,” said Tak Hyun-wook, director of development and planning at BGF Retail. “We’ll continue to experiment with different enterprises to both increase our revenue stream, and provide convenience to our customers.”

One thought on “When Karaoke Met a Convenience Store”