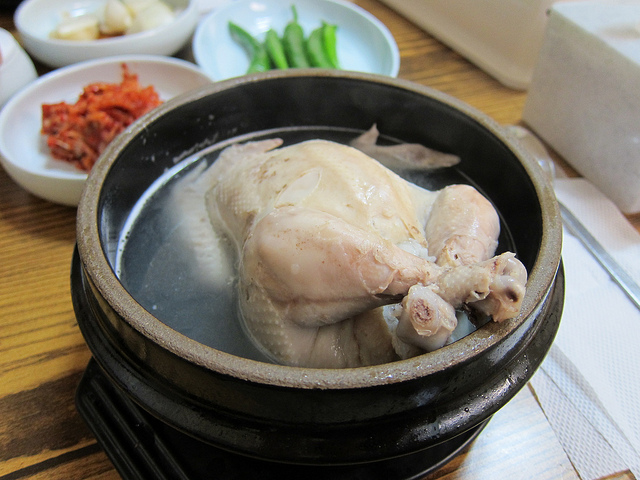 Samgyetang is a kind of chicken soup cooked with ginseng and other ingredients that are known to increase stamina. (image: Eugene Kim/flickr)

SEJONG, Aug. 13 (Korea Bizwire) – Exports of Samgyetang, a popular health food often consumed in summer to help the body resist the heat, are soaring. Samgyetang is a kind of chicken soup cooked with ginseng and other ingredients that are known to increase stamina.

The Ministry of Agriculture, Food and Rural Affairs announced that exports of Samgyetang increased 88 percent from January to July this year ($5.9 million), compared to the same period last year ($3.2 million). Of note, exports to the US jumped 300-fold, recording sales of $2,639,000.

Samgyetang was first exported to the US last year in July. The Ministry of Agriculture, Food and Rural Affairs explains that after raising the degree of recognition at a food exhibition held in New York in June, and strengthened advertisements in and around Korean neighborhoods, consumption increased.

The Samgyetang that is exported can be purchased either in pouches or frozen.

Officials say that in addition to the US, Japan, Taiwan, Singapore, and Australia are major countries of export. “Consumption in the US is still dominated by Koreans that live abroad. However, consumption in Asian territories such as China, Taiwan and Japan is usually by locals that tasted Samgyetang during their visits to Korea.”