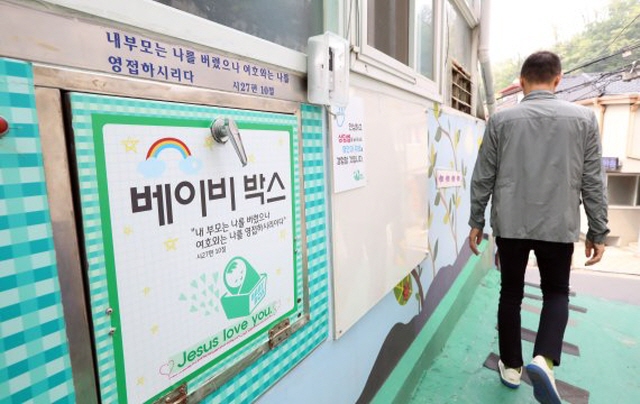 A baby box set up in front of Jusarang Community Church in southern Seoul. The hatch was established in 2009 as the first of its kind in South Korea. (Yonhap)

SEOUL, Feb. 1 (Korea Bizwire) – Attached to a concrete wall covered in colorful murals in a neighborhood in southern Seoul, a small metal handle leads to an unlikely crawlspace barely large enough for a newborn.

Balmy warmth fills the interior thanks to a heating system. But the space is for those who are losing the world’s coziest protection – that provided by their parents.

The majority of those who dropped their offspring at this baby box are moms who had unwanted babies out of wedlock or after they were raped, with those in their 20s accounting for more than 50 percent followed by teenagers, according to Joosarang Community Church, which operates the hatch.

“Moms usually left a letter that carries heartbreaking stories and resolute pledges to return someday. They mostly were in desperate circumstances, having nowhere to go and nobody to turn to,” said church pastor Lee Jong-rak.

It is the first of its kind in South Korea, and one more baby box has been in operation since 2014 in the city of Gunpo, just south of Seoul. As of Wednesday, the baby box in Gunpo had received 116 newborns.

After a police probe and administrative procedures by a ward office, the babies are sent to an orphanage or foster home.

Since its establishment, the baby box has been a source of controversy, as critics argue that it encourages people to take the easiest way out of their parenting responsibilities.

For the first several years, the government had called for its removal, telling Lee that he could face criminal charges for aiding and abetting child abandonment. He often received calls of complaint from angry citizens.

“Before setting up this arrangement, there were several cases of newborns just being dropped at the gate of my residence. So I felt the need for a very basic installation to help save lives,” he said.

Lee has refused to install security cameras and regularly wipes away fingerprints left on the box to keep the parents from being caught and punished.

But that does not mean the pastor accepts babies without qualms. The opening of the hatch door triggers a bell inside the church. The pastor, or a staff member, then rushes out to chase the parents and attempt to dissuade them from leaving their child behind.

“Some 95 percent of those had at least brief talks with me, and around 17 parents ended up changing their minds,” he said.

The church takes care of babies for up to six months. Single moms who decide to rear their own child can receive various forms of support, including financial subsidies and counseling services.

At the start, there were not as many infants being left at the baby box.

“After the revision of the adoption law in 2012, we saw a surge in the number of infants sent to us,” church official Yang Seung-won said. 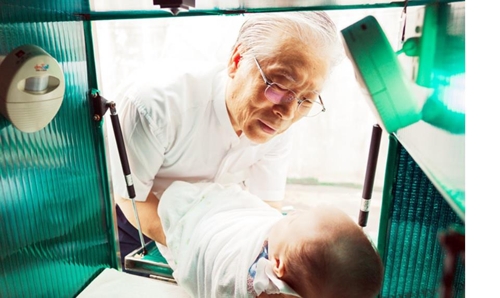 Under the Special Adoption Act, it is mandatory for parents to register their babies under their own name if they want to have them adopted.

The legislation aims at encouraging domestic adoption amid a dwindling birthrate by making the adoption process more transparent and boosting the rights of children. But there have been growing concerns about its side effects.

“Though a privately run baby box cannot be a sustainable option, the government has sat idle,” argued So Ra-mi, a lawyer at the Human Rights Law Foundation of Gonggam.

The Seoul Metropolitan Government, however, said that, under current regulations, any official support is not possible for children who go undocumented.

Seeking to devise more practical, legal tools to better protect both children and single moms, pastor Lee proposed a bill last year, along with Rep. Oh Shin-hwan of the minor opposition Bareunmirae Party, that allows women to give birth secretly in case of unwanted pregnancies.

Under the proposal, moms who wish to give birth anonymously shall be able to surrender their newborn to the state while keeping their identity in sealed documents at a state agency.

While the children will be registered under state organizations, they will have the right to know their biological parents’ identities when they turn 16, after a court approval.

Similar laws exist in some advanced nations, such as Germany and France.

“I truly agree with the original goals of the adoption law. But such a regulatory move drives some desperate single moms into a corner,” lawmaker Oh said, calling for the swift passage of the bill which has been pending at the National Assembly.

The proposal also calls for extended support for single moms, who have largely been marginalized in South Korean society. The pastor said no moms have ever come to him who have the means to raise their child on their own.

Last year, Pastor Lee was chosen by LG Foundation, operated by the conglomerate LG Group, as “upright person” of the year.

Expressing gratitude to some 1,300 sponsors, Lee said he will devote his life to protecting lives and supporting single moms.

“When I first opened the baby box, I prayed that nobody would be dropped here, and that is still my wish,” he said. “I am dreaming of a society where there is no longer a need for such a baby box.”

One thought on “Leaving Controversies Behind, ‘Baby Box’ Saves Over 1,500 Lives in a Decade”