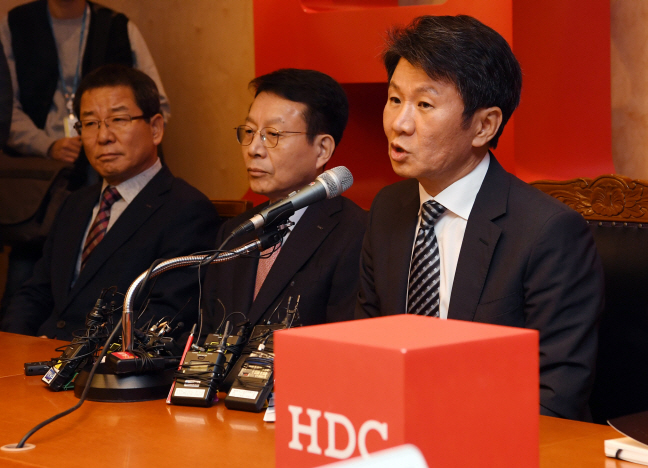 HDC Hyundai Development Chairman Chung Mong-gyu (R) answers questions from reporters on the company’s plan to enhance Asiana Airlines’ financial status after acquisition at a press conference held at its headquarters in Seoul on Nov. 12, 2019. (Yonhap)

SEOUL, Nov. 12 (Korea Bizwire) — HDC Hyundai Development Co., a midsized construction firm, is aiming to diversify its business portfolio as it was picked as the preferred bidder for a stake in Asiana Airlines Inc., South Korea’s No. 2 airline.

In the final auction for sale of a 31-percent stake in the airline, a HDC Hyundai Development-led consortium beat two other bidders, one led by airline-to-cosmetics conglomerate Aekyung Group and another by homegrown private equity fund Korea Corporate Governance Improvement (KCGI) to take the lead in the race to take over the airline.

“As we have duty-free shops and hotel & resort businesses, as well as the mainstay construction business, we expect some synergy from the acquisition in terms of logistics and product purchases,” HDC Hyundai Development Chairman Chung Mong-gyu said in a press conference.

The chairman said HDC Hyundai Development will focus on transforming Asiana Airlines into a financially healthy company amid woes in the airline industry.

In recent months, airlines have been struggling with snowballing losses as South Koreans increasingly opt not to travel to Japan and Hong Kong due to export restrictions of key industrial materials to Korea and political unrest, respectively.

The consortium submitted the overall acquisition price of 2.5 trillion won for the 31-percent stake, new shares and the six affiliates that include low-cost carriers Air Busan and Air Seoul Inc.

Meanwhile, Kumho Industrial Co., which owns the Asiana stake, said it had selected the HDC consortium as it was deemed the “most qualified” buyer to put Asiana’s business back on track and secure its mid- and long-term competitiveness.

Kumho Industrial said the proceeds from the stake sale will be mainly spent to pay debts and invest in new businesses. The 31-percent stake was valued at 452 billion won at Tuesday’s closing price of 6,580 won.

Analysts said HDC Hyundai Development and Kumho Industrial may, in their negotiations, find a deep gap between them over the price of Asiana’s existing shares.

“Kumho Industrial will likely want to sell the 31-percent stake at higher prices but HDC Hyundai Development may want to purchase the existing stocks based on Thursday’s closing price of 5,310 won,” said Kim Se-ryeon, an analyst at eBEST Investment & Securities Co.

On Thursday, the three consortia submitted final bids to Credit Suisse, the sole lead manager of the deal.

Kumho Industrial is expected to make a concession as it won’t likely to miss this “golden opportunity” to sell the airline stake though the suggested price is not satisfactory, Kim said. 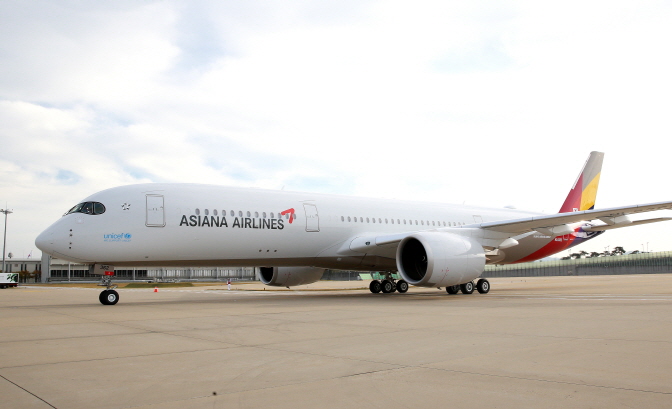 Analysts expected Kumho Industrial to agree to sell the airline stake at a price a bit higher than 400 billion won in line with Kumho Asiana Group’s broad restructuring efforts.

Kumho Asiana put its loss-making airline unit up for sale to secure liquidity in April this year.

Asiana Airlines owed financial institutions a total of 2.7 trillion won as of the end of June, with 500 billion won of loans due to mature by the end of December.

It is scheduled to release its January-September earnings results on Nov. 14.