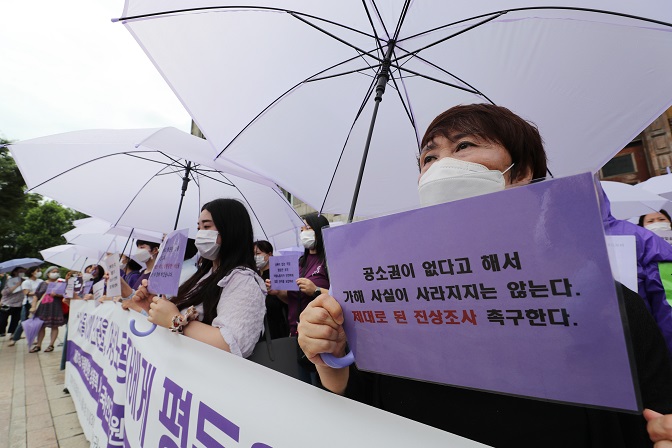 SEOUL, July 28 (Korea Bizwire) — Women’s groups and a lawyer representing a victim who accused a late Seoul mayor of sexually harassing her formally requested the national human rights commission to look into the high-profile case on Tuesday.

The victim, who worked as a secretary for Seoul Mayor Park Won-soon, filed a complaint with the police earlier this month, claiming that he sexually harassed her over four years and that her repeated calls for help went unanswered.

The police launched a probe into the case, but Park was found dead at a Seoul mountain two days later in an apparent suicide.

Calling the case a typical case of power-based sexual abuse, the civic groups had rejected a proposal by the city government to launch an independent investigative committee to handle the case, saying the city government should also be probed instead of organizing it.

Kim Jae-ryun, a lawyer defending the victim, said those representing the public servant decided to ask the National Human Rights Commission of Korea to launch an ex-officio investigation that encompasses not only the single case but the city government’s overall work culture.

“The reason we decided to request an ex-officio probe, instead of filing a complaint, was so that the human rights commission can actively look into the issue that goes beyond the victim’s accusations and advise on policy changes,” she said ahead of submitting an application for the probe.

“There are many areas in this case that need to be (addressed and) improved. (We) urge the commission to investigate the case and make recommendations for policy change,” Kim said.

A document the civic groups submitted to the rights commission asks the commission to look into whether city officials neglected the case or took appropriate follow-up measures for the victim.

It also questions how the complaint was leaked to city officials. 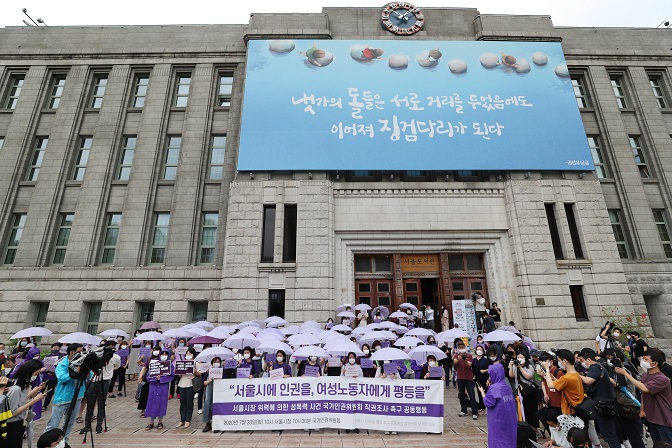 The civic groups also asked the commission to carry out research on whether there are sexually discriminative factors in hiring secretaries at the government and public organizations and to draw up preventive measures against various misconduct by elected public servants.

While the rights commission’s recommendation is not legally binding, it “aims to recover the victim’s rights and obtaining remedies to damages by conducting reconciliation between the parties, and other appropriate measures as dictated by the legal system,” according to the commission’s web site.

The victim and civic groups have urged the city to fix its work culture, which they claimed worsened the case.

In a July 22 press conference, they asked city officials to take responsibility, saying that the case “goes beyond issues personally related to Park” and is actually “an organized crime that was sustained by power.”

The victim asked for help from around 20 people at the city government, including those in higher positions and in charge of human resources, but did not get any support, they said.

Tuesday’s move took place in line with a march of dozens of supporters, clad in purple, a color associated with efforts to achieve gender equality, in solidarity with the victim.

Holding violet umbrellas, the supporters raised a sign that read “Human rights to Seoul City, equality for women workers” as they marched from Seoul City Hall to the rights commission’s office, both in central Seoul.

On Tuesday, the police also executed a court-approved raid on the computer servers of four internet forum sites in its broadening investigation into “secondary assaults” on Park’s former secretary.

The police were looking into posts and comments on the four internet communities, including Clien, DC Inside and FM Korea, in search of potential evidence of online insults or slander targeting the secretary as of Tuesday evening, according to police officials.

The search comes after the former secretary filed a complaint with the police, requesting an investigation into online hate comments against her.

The police plan to bring online defamation cases, as well as criminal charges of insult, against those who are found to have inflicted secondary assaults, officials said.