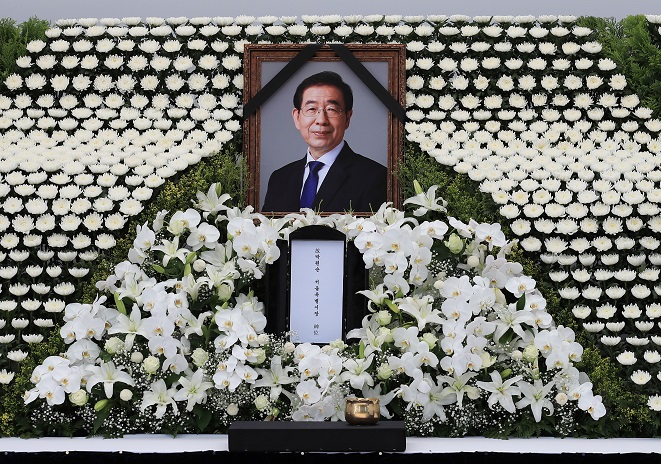 SEOUL, July 12 (Korea Bizwire) — While South Koreans are in shock and grief over the abrupt death of Seoul Mayor Park Won-soon last week, the political community here seems to be split over the formalities of publicly mourning it.

The controversy is largely because he apparently took his own life in the face of a probe into suspicions that he had sexually harassed one of his female former assistants.

Critics call for mourning Park’s death in a low-key manner, citing the human rights of the alleged victim, who filed a formal complaint with police against him.

They question whether Park deserves a five-day funeral officially held by the Seoul city government. Park, who died Thursday, is scheduled to be laid to rest Monday.

More than half a million people supported an online petition, posted on the website of the presidential office, against the city’s move as of Sunday morning.

It pointed out that the suspected sexual harassment case has been closed without any investigation due to Park’s death.

“Do the people have to watch the showy five-day funeral of an influential politician suspected of sexually harassing (a woman)? A family funeral is appropriate,” it read.

Kim Chong-in, caretaker leader of the conservative main opposition United Future Party, had put a plan on hold to pay a condolence call to Park’s family.

Ahn Cheol-soo, head of the smaller opposition People’s Party, wrote on his Facebook account that “I have decided not to pay a separate condolence call,” although Park’s passing is a sad incident.

He added he does not agree with the Seoul city’s five-day funeral for Park either, saying it’s more needed than any other time to look back on “perceptions and behaviors” by senior public servants. 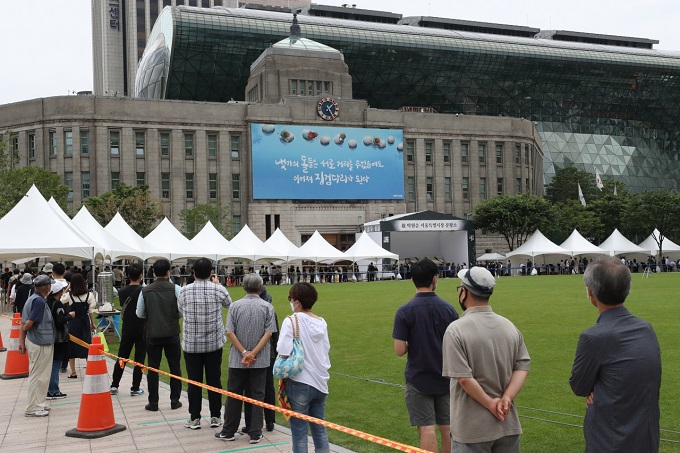 Citizens wait in line to mourn at a memorial altar set up in front of Seoul City Hall in the city center for late Mayor Park Won-soon on July 12, 2020. (Yonhap)

Two female lawmakers with the progressive opposition Justice Party — Ryu Ho-jeong and Jang Hye-yeong — earlier expressed their sympathy for the woman who had allegedly suffered sexual harassment and vowed refusal to pay respects to Park.

Choi Min-hee, a former lawmaker with the ruling Democratic Party (DP), accused the Justice Party of “politicizing” the issue of mourning the death of the liberal-minded mayor who was in office for a decade.

“Now is the time to mourn,” Choi said in her Facebook message.

The DP has sought to prevent political disputes related to Park’s death from escalating.

“Currently, no facts have been revealed,” he said. “There shouldn’t be another controversy being created.”

Meanwhile, a group of 227 citizens in Seoul filed a petition with the Seoul Administrative Court to prevent the city government from holding the five-day official funeral.

The court dismissed the petition on Sunday evening, meaning that the funeral will go ahead as planned.