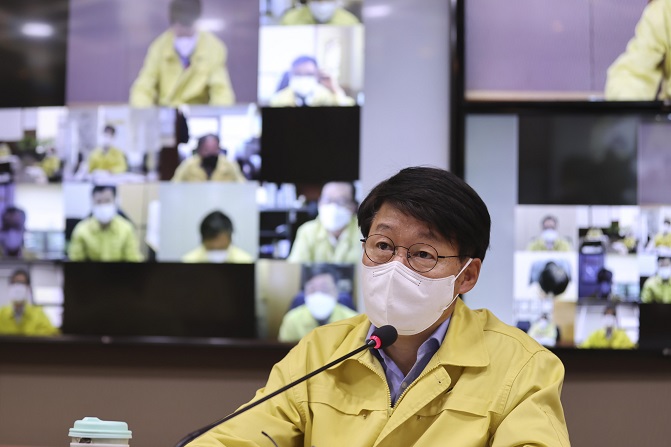 Minister of Employment and Labor An Kyung-duk presides over a meeting of government and public officials on industrial safety in Seoul on June 4, 2021. (Yonhap)

SEOUL, June 4 (Korea Bizwire) — Domestic workplaces will be ordered to suspend operations in the event of on-duty deaths of employees or other serious industrial disasters, the labor minister said Friday.

Minister of Employment and Labor An Kyung-duk said the government will order workplaces that report fatal industrial accidents to halt their entire operations until safety is ensured.

“Workplaces that have suffered serious accidents must suspend operations without fail.

Such a work suspension will be lifted only when representatives of workers and experts confirm safety,” An said, presiding over a meeting of industrial safety-related officials at the ministry and affiliated agencies.

The current Occupational Safety and Health Act stipulates that, in the event of a serious accident, an order to suspend the concerned work can be issued. It also says that the suspension of the entire workplace can be possible when there is a risk of the spread of grave disasters.

Labor circles have asked the government to actively utilize its work suspension order system to prevent serious industrial accidents, whereas employers have demanded the suspension order be minimized due to enormous potential losses.

The ministry’s latest move came after the National Assembly passed a revision of the occupational safety law in January to strengthen the punishment of business owners and CEOs in the event of on-duty deaths or other serious workplace disasters. The revised law will go into effect in early 2022.