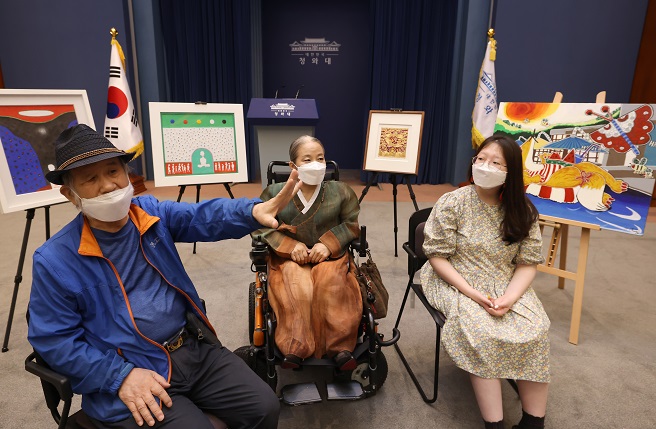 Participants in a upcoming special exhibition of works by disabled artists at the former presidential compound of Cheong Wa Dae in Seoul speak during a meeting with culture ministry officials on Aug. 9, 2022, in this photo provided by the ministry.

SEOUL, Aug. 10 (Korea Bizwire) — The culture ministry will hold a special exhibition of art pieces by disabled artists at the former residential compound of Cheong Wa Dae as the first program to be held under a plan to use the facility as an art center.

The exhibit will open on Aug. 31 for a three-week run on the second floor of the Chunchugwan building, formerly used as a press center, inside the compound in central Seoul, the Ministry of Culture, Sports and Tourism said in a press release Wednesday.

On display will be some 50 works by the same number of disabled artists, including Jung Eun-hye, a caricature artist who impressed the public with her performance as a character with Down syndrome in the popular tvN drama “Our Blues.”

It marks the first exhibition to be held at Cheong Wa Dae after the ministry announced a plan last month to transform the site into a multipurpose cultural complex.

Cheong Wa Dae, which had been the presidential office and residence for the past 74 years, was opened to the public after President Yoon Suk-yeol relocated the top office to the former defense ministry building in Yongsan in central Seoul in May.