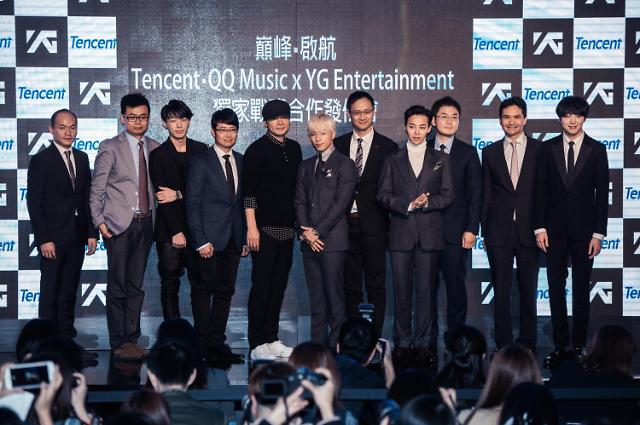 According to the agreement, YG will distribute its music and music videos through QQ Music, Tencent’s digital music service platform. (image: YG Entertainment)

On December 2, the two companies sealed the MOU for their strategic partnership in Hong Kong. According to the agreement, YG will distribute its music and music videos through QQ Music, Tencent’s digital music service platform. In addition, Tencent has exclusive rights to distribute YG content in China.

Along with the content distribution, the two firms plan to design measures to protect digital music sales and digital copyright, and to get rid of illegal music downloads.

Meanwhile, YG and Tencent will jointly produce broadcast content from 2015. YG will take charge of the production, and Tencent’s QQ Music will offer support by investing human and material resources while retaining the Chinese rights to the content. Also, they will launch an audition program in which they discover talented musicians, choose and train them, and promote the stars in one-stop manner.

NEWS & BRAND
Tencent’s many services include social network, web portals, e-commerce, and multiplayer online games. Its offerings include the well-known (in China) instant messenger Tencent QQ and one of the largest web portals in China, QQ.com. Mobile chat service WeChat has helped bolster Tencent’s continued expansion into smartphone services.
It is the fifth-largest Internet company in the world after Google, Amazon, Alibaba, and Ebay as of October 2014. In 2012, Tencent’s revenue outstripped Facebook’s by over $2 billion. In September 2013, Tencent’s market valuation rose to US$101 billion, nine years after going public.
As March 12, 2014, the market value of Tencent is about 1.041 trillion yuan (US$150 billion). (Wikipedia)

Yang Min-suk, CEO of YG Entertainment, said, “We were in need of a good partner for faster growth in the Chinese market. The integration of YG’s contents and Tencent’s influential distribution platform will create synergy beyond our imagination.”

Tong Taosang, senior executive vice president of Tencent, said, “Our partnership will be an ‘aircraft carrier’ in the entertainment business, where YG’s music and stars come together with Tencent’s platform.”