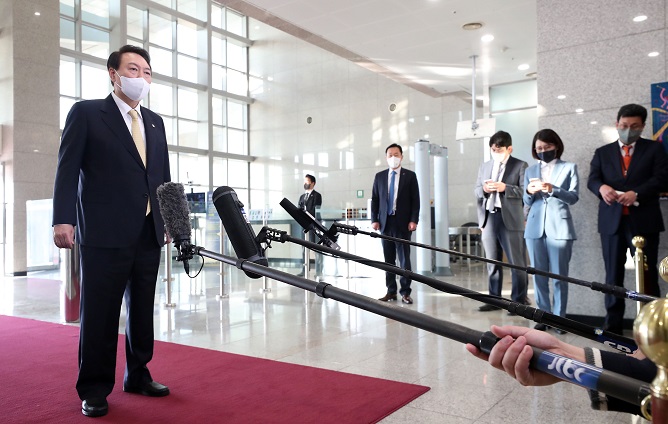 SEOUL, Nov. 21 (Korea Bizwire) — President Yoon Suk-yeol will stop holding routine Q&As with the press starting Monday, his office said, after a reporter got into a shouting match with one of his aides during a session last week.

The quarrel happened after Yoon said it was “unavoidable” that his office barred local broadcaster MBC’s reporters from boarding the presidential plane to cover his Southeast Asia trip earlier this month, given that it showed “very malicious behavior” with its “fake news.”

Yoon was referring to MBC’s airing of his hot mic moment in New York in September, which was subtitled to make it appear that he used vulgar language to talk about U.S. lawmakers and President Joe Biden.

As he walked away to go up to his office, an MBC reporter shouted at his back, “What did MBC do that was malicious?”

Soon after, he got into a heated argument with a presidential aide who scolded him for being rude.

“The presidential office has decided to suspend its routine Q&A sessions as of Nov. 21,” it said Monday in a notice to the press.

“We decided that they could not be continued without fundamental measures to prevent a recurrence of the recent unsavory incident.”

“The Q&A sessions were conceived for open communication with the people,” it added. “We will consider resuming them if measures are drawn up to properly fulfill that purpose.”

Asking the president questions as he arrives for work has become a Yoon hallmark and given reporters unprecedented access to the president in his first six months in office.

The sessions have never been discontinued except briefly following a COVID-19 outbreak in the press room located in the same building as the president’s office and during a weeklong national mourning period over the Itaewon crowd crush.

In the early months, the Q&As were sometimes blamed for a decline in Yoon’s approval ratings as he appeared to make unfiltered remarks.

The rival parties clashed over the decision.

“MBC is the one that caused the indefinite suspension of doorstepping … MBC is a public broadcaster but has not apologized over the recent series of controversies,” Rep. Park Jeong-ha of the ruling People Power Party said.

“Is it an unsavory incident (for reporters) to ask the president uncomfortable questions?” Ahn said.

“This is truly an authoritative and narrow-minded response. If he wants open communication, he needs to be broad-minded enough to tolerate uncomfortable questions.”

Kim was not the secretary involved in the shouting match.

Later in the day, the Journalists Association of Korea, the country’s largest organization with some 11,000 journalist members, issued a statement, urging the presidential office to “immediately stop its attempts to estrange the journalists and stir up further conflicts.”

It blasted the presidential office for trying to blame MBC for the suspension of doorstepping.

The club also criticized the presidential office for contacting the senior journalists who cover the presidential affairs and discussing punishment options for MBC prior to suspending the doorstepping.

“Such an act appears to be not only an intense retaliation against journalism with opposing opinions, but also scapegoating of a single agency to tame the news media as a whole,” the club said in the statement.