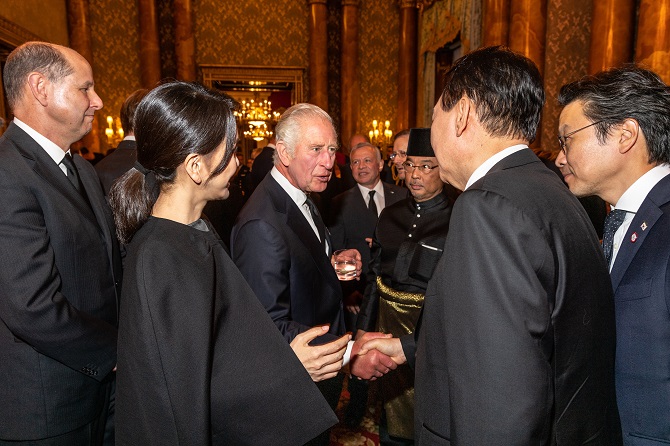 South Korean President Yoon Suk-yeol (2nd from R) shakes hands with King Charles III as he joins a reception at Buckingham Palace in London on Sept. 18, 2022, to offer condolences over the death of Queen Elizabeth II, in this photo provided by the British Foreign Ministry.

OTTAWA, Sept. 23 (Korea Bizwire) — South Korean President Yoon Suk-yeol wound up his second overseas trip amid embarrassment over the use of foul language caught on hot mic, but the trip was marked by one unmistakable outcome: the first summit with Japan in nearly three years.

Yoon began the trip with a stop in London to attend the state funeral of Queen Elizabeth II, an occasion that also provided the president with the opportunity to meet with new King Charles III and mingle with other leaders who had flown in from across the world.

Despite the solemnity of the events surrounding the funeral, Yoon, whose approval ratings tumbled to the 20 percent range in the summer, took another hit from critics at home after he was forced to postpone signing a condolence book for the queen.

Yoon’s office said the signing was postponed from Sunday to Monday, the day of the funeral, per the instructions of the British royal family, given traffic conditions in London that made it difficult for all the visiting foreign leaders to travel to Westminster Hall at the same time.

But critics claimed Yoon had been snubbed by the British royal family and that leaders from the Group of Seven nations had received proper care in accordance with diplomatic protocol. 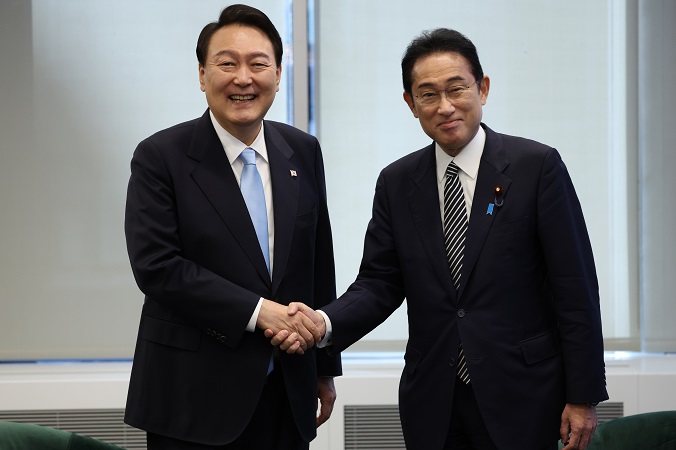 South Korean President Yoon Suk-yeol (L) and Japanese Prime Minister Fumio Kishida pose for a photo prior to their talks in New York on Sept. 21, 2022, as they meet on the sidelines of the U.N. General Assembly. (Yonhap)

Yoon’s second stop was New York, where the president spent the largest portion of his seven-day trip to attend the U.N. General Assembly, hold a series of bilateral summits on the sidelines, and meet with diverse groups of people, including students, Korean American scientists and global business leaders.

In previewing the trip, the presidential office had picked three highlights: Yoon’s first address to the U.N. General Assembly, the first bilateral summit between South Korea and Japan in nearly three years, and a second summit between Yoon and U.S. President Joe Biden.

The South Korea-Japan summit, in particular, raised hope of a breakthrough in relations badly frayed over wartime forced labor and other issues related to Tokyo’s 1910-45 colonial rule of the Korean Peninsula.

The summit with Biden was also seen as an opportunity to deliver South Korea’s concerns about the U.S. Inflation Reduction Act (IRA), which is feared to put Korean carmakers at a disadvantage in the American market, and move forward discussions on a potential currency swap deal that could help stabilize financial markets.

What played out, however, was a tug of war between South Korea and Japan over whether the summit would be held at all, with the end result being a 30-minute meeting described by South Korea as “informal talks.”

The summit took place suddenly, as the details had been kept under wraps for days, in the form of Yoon visiting the venue of an event hosted by Japanese Prime Minister Fumio Kishida in New York.

Yoon and Kishida “agreed on the need to improve bilateral relations by resolving pending issues,” South Korea’s readout of the meeting said. The two agreed to instruct their diplomats to accelerate talks to that end.

Yoon and Kishida also “shared serious concern about North Korea’s nuclear program,” including its recent legalization of nuclear arms and the possibility of a seventh nuclear test, and “agreed to cooperate closely with the international community to respond to it,” according to the readout.

A presidential official hailed the summit as “the first step toward producing tangible results.”

“After two years and 10 months, despite the existence of various disputes between South Korea and Japan, the two leaders met and took the first step toward a resolution. That is why it was highly significant,” the official told reporters in New York. 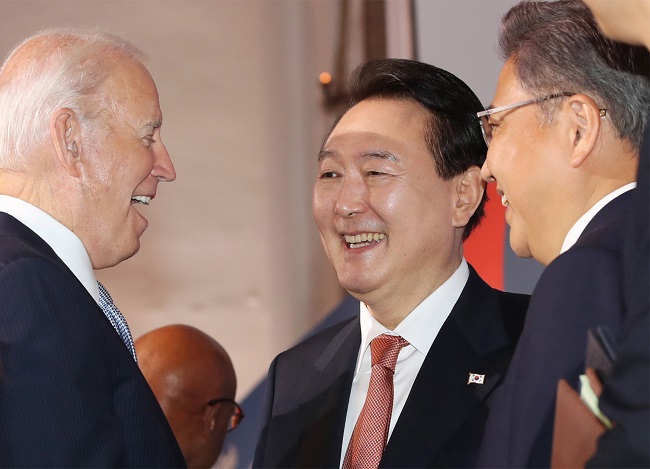 Meanwhile, the summit with Biden did not materialize as planned due to scheduling issues caused by the U.S. president’s unforeseen attendance at Queen Elizabeth’s funeral and U.S. domestic political events, according to Yoon’s office.

“President Yoon explained our businesses’ concerns about the U.S. Inflation Reduction Act and asked that the U.S. administration cooperate closely with South Korea in the process of enforcing the IRA so as to resolve our concerns,” Yoon’s office said in a press release summarizing the three encounters.

“In response, President Biden said he is well aware of our concerns, and that South Korea and the U.S. should continue to hold serious consultations,” it added.

On a potential currency swap deal, the presidential office said the two leaders agreed to “cooperate closely to implement liquidity facilities for financial stabilization if needed.”

On security issues, they “assessed the consultations under way between South Korea and the U.S. over extended deterrence, and agreed to further strengthen bilateral cooperation to deter North Korea’s attacks and to come up with joint response plans against North Korea’s provocations,” it said. 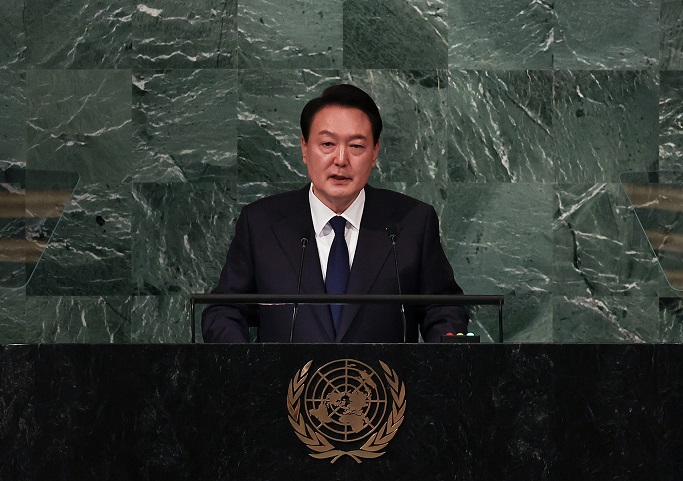 The biggest news of the day, however, emerged after video circulated of Yoon apparently using foul language during the Global Fund’s Seventh Replenishment Conference in New York.

In the clip, Yoon could be heard telling aides in vulgar language that it would be embarrassing if the National Assembly did not approve of something unspecified,

It was initially thought that he was referring to Biden’s pledge to contribute another US$6 billion to the Global Fund to Fight AIDS, Tuberculosis and Malaria, and the embarrassment if Congress refused to endorse it.

Critics at home, including the main opposition Democratic Party, accused Yoon of creating a diplomatic disaster, sending the presidential office scrambling to come up with a plausible explanation.

“He wasn’t speaking publicly on the stage but in passing, and although I don’t know who recorded it and how, I actually think it should be verified,” a senior presidential official told reporters in New York.

“I think it’s highly inappropriate to draw a link between private remarks and diplomatic accomplishments,” the official added.

Hours later, Yoon’s senior secretary for press affairs, Kim Eun-hye, said the president made no mention of Biden and that the actual word he used was the Korean word for “throw out” because he was talking about how he would be embarrassed if the opposition-controlled National Assembly rejected his pledge to contribute $100 million to the Global Fund over the next three years.

The gaffe likely left an indelible stain on the president’s trip, which was planned around his mantra of freedom and solidarity, with both concepts featuring prominently in his U.N. speech, and sought to honor the three nations that sent the most troops to fight alongside South Korea during the 1950-53 Korean War.

On his final stop, Yoon visited Canada to hold a summit with Prime Minister Justin Trudeau on securing stable supply chains for the production of electric vehicle batteries.