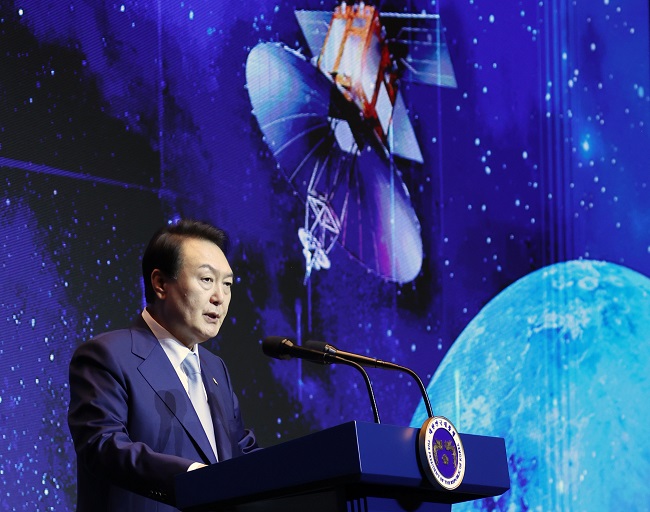 President Yoon Suk-yeol unveils a space roadmap at a meeting on space policies on Nov. 28, 2022. (Yonhap)

SEOUL, Nov. 28 (Korea Bizwire) — President Yoon Suk-yeol said Monday that South Korea will land a spacecraft on the moon in 2032 and begin exploring lunar resources under its ambitious roadmap for a “future space economy.”

Under the long-term plan, South Korea aims to land a spacecraft on Mars in 2045, when the nation will celebrate the 100th anniversary of Liberation Day, Yoon told a meeting on space policies.

“From now on, a country with a vision for space can lead the global economy and solve the problems facing humanity,” Yoon said.

“The dream for a space power will not be a distant future, but an opportunity and hope for children and young people,” Yoon said.

South Korea will develop a homegrown rocket within five years for the moon mission, Yoon said.

The roadmap included six major policy areas, including promotion of the space industry and education of professionals.

An aerospace agency similar to the U.S. National Aeronautics and Space Administration will be established, Yoon’s office said.

Establishing an aerospace agency was one of Yoon’s campaign promises, and the government will push to launch the agency next year through legislation of a special bill.