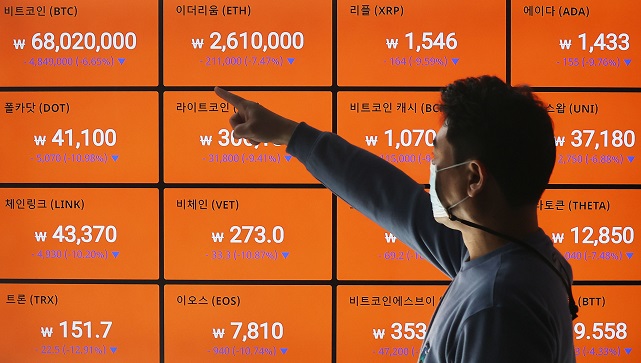 An electronic signboard at the cryptocurrency exchange Bithumb in Seoul on April 20, 2021. (Yonhap)

SEOUL, April 26 (Korea Bizwire) – With the cryptocurrency investment fever spreading among South Korea’s young generation in their 20s and 30s, some are showing signs of ‘cryptocurrency addiction.’

A 28-year-old office worker surnamed Nam confessed that he is showing signs of addiction, with his mood changing from joy to sorrow or vice versa everyday depending on the ups and downs of the price of the coins.

“After achieving a high yield rate in a single day after starting the trading of coins, I lost interest in savings in banks or stocks,” he said.

“Even in coin trading, I can’t stop myself from paying more attention to new coins and looking for high risk and high return coins.”

According to data that Rep. Kwon Eun-hee of the minor opposition People’s Party received from the Financial Services Commission, the number of new subscribers to the nation’s top four exchanges – Bithumb, Upbit, Cobit, and Coinone – for the first quarter of this year stood at close to 2.5 million.

Despite the boom in cryptocurrency investment particularly among young people, many experts call for special caution since there are many cryptocurrencies that have highly volatile prices and have no tangible value.

The number of young people who have negative views of the cryptocurrency investment boom is also not small.

“The rally of cryptocurrencies relies solely on people’s belief that the value of such coins would continue to rise,” Kim Chang-hyun, a 26-year-old office worker, said.

“However, if such belief loses credibility, the bubble of cryptocurrencies would eventually burst, dealing a heavy blow to some people.”

Some voice worries about cryptocurrency investors who feel nervous all day watching the cryptocurrency market that runs seven days a week and 24 hours a day.

A 28-year-old officer worker said, “Today, if you go to a restaurant for lunch, you can see lots of young workers following the changes in coin prices through their smartphones.”

Nonetheless, there are some who regard cryptocurrency investment as the last hope for the young generation to tide over job and housing difficulties.

“Cryptocurrencies are the only answer for those in their 20s,” said a 29-year-old office worker surnamed Kim, who started investing in cryptocurrencies in 2017.

“Even though it’s dangerous, there is no other alternative.”