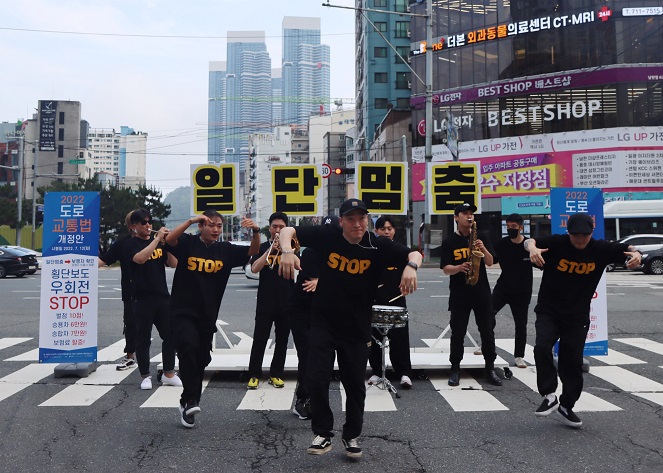 This photo provided by Busan Nambu Police Station shows a youth art group performing at a crosswalk in the southeastern port city of Busan.

BUSAN, June 30 (Korea Bizwire) — A youth art group, together with the police, launched an eye-catching campaign to publicize the upcoming change in the way pedestrians cross an intersection.

Life Art Edition recently held a surprise performance at a crosswalk. While cars were stopped for the traffic light, it held a dance and band performance at the crosswalk in the neighborhood of an intersection in Nam Ward in the southeastern port city of Busan.

During the performance, the group publicized the revised intersection crossing regulations.

Under the regulations promulgated in January, when drivers turn right at a red traffic right, they have to stop right before the stop line, crosswalk, and intersection and then slowly turn right without hindering other vehicles following traffic signals.

When the traffic light is green, they can slowly turn right but if there are pedestrians in the crosswalk they face after turning right, they should stop temporarily and go after the pedestrians have finished crossing.

The regulation will take effect from July 12, and those who violate this regulation can be levied a fine of 70,000 won (US$53.76) for commercial vehicles and 60,000 won for passenger cars.