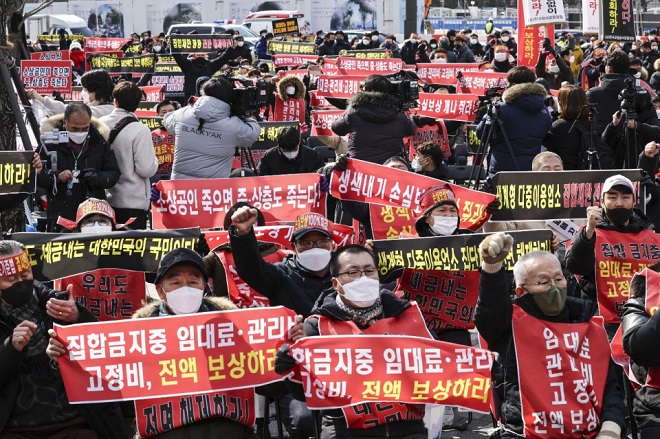 Protestors chant slogans in Seoul on Feb. 15, 2022, as representatives from a national coalition of self-employed workers stage a rally to call for the lifting of the government’s restrictions on their business hours and compensation for losses faced by the industry due to the coronavirus pandemic. (Yonhap)

SEOUL, Aug. 7 (Korea Bizwire) — About one out of eight mid-aged people in South Korea has borrowed money due to economic challenges caused by the coronavirus pandemic, a survey showed Sunday.

According to the survey of 3,923 people by the Korea Institute for Health and Social Affairs, 12.5 percent of people in their 40s and 11.5 percent of those in their 50s said that they have taken out loans or borrowed from their acquaintances at least once due to economic challenges during the pandemic.

The figure was much higher than 3.5 percent and 7.7 percent who said so among those aged 20 or younger and those in their 30s, respectively. It was also higher than the corresponding ratio of 8.5 percent for all the people surveyed.

Of those polled, 8.4 percent said that they have closed savings accounts or canceled insurance policy contracts to tide over pandemic-caused economic challenges.

The survey also showed that 31.4 percent said they have experienced income reductions due to the pandemic. The ratio for the self-employed stood at 76.6 percent and that for temporary and contract workers was 49 percent.

Since the country’s first coronavirus outbreak in early 2020, the government has enforced a set of social distancing rules to stem the spread, including business hour curfews and restrictions on people’s movement and public gatherings.

Those rules have hurt small self-employed merchants and workers who have lost jobs due to the pandemic, which has led to a decline in their income. Almost all of the restrictions were lifted recently as part of efforts to return to pre-pandemic normalcy.