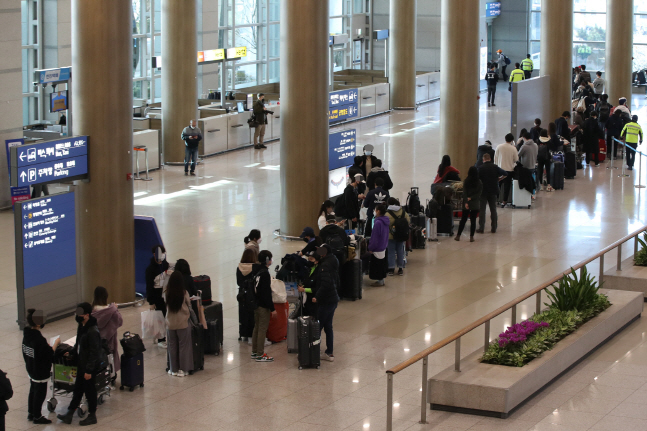 Passengers from London are in line in the arrival lobby of Incheon International Airport, west of Seoul, on March 23, 2020, to be bused to a nearby hotel, where they will undergo COVID-19 tests. (Yonhap)

SEOUL, March 26 (Korea Bizwire) — All entrants from the United States will be faced with strengthened quarantine measures starting Friday as South Korea grapples with a surge in imported cases of the new coronavirus, health authorities here said Thursday.

Starting at midnight, passengers from the U.S. who do not show symptoms of COVID-19 such as fever will be required to self-isolate at home for two weeks, the Korea Centers for Disease Control and Prevention (KCDC) said.

Those who show symptoms will be required to take tests upon arrival.

The country has been already enforcing both a two-week quarantine period and virus tests for all long-term arrivals from Europe, regardless of symptoms.

The authorities said European entrants face more strict measures as there is a difference in imported confirmed cases between the two regions.

They also said efficiency is reduced when COVID-19 tests are conducted on all entrants, which could eventually burden medical staff who have been overloaded with their work.

“There are some doubts over whether it is right to conduct tests on all people regardless of their symptoms as it is impossible to screen any kind of infectious disease before it occurs,” Choi Won-seok, an infectious disease expert at Korean University Hospital, said. 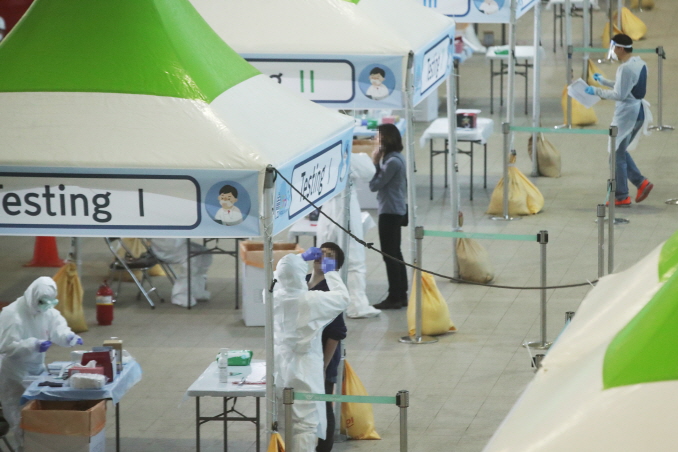 Passengers from Europe undergo COVID-19 tests at a walk-through clinic set up outside Incheon International Airport, west of Seoul, on March 26, 2020. (Yonhap)

The strengthened measure comes as the country reports an increasing number of imported COVID-19 cases despite a gradual decline in domestic cases.

As of Thursday, 57 out of the 104 new confirmed cases were considered imported, the KCDC said. Of them, 49 are South Korean nationals and eight are foreigners.

A total of over 200 imported COVID-19 cases were added just over the past 11 days, the KCDC said.

KCDC Deputy Director Kwon Jun-wook told reporters said Thursday that health authorities will require all passengers from the U.S. to get tested if the virus outbreak further worsens there.

The authorities said foreigners who enter the country must download a self-check mobile application to regularly report their state of health online.

Those who feel unwell for two consecutive days will be contacted by a community health service center that will determine if the person needs to be tested for viral infection.

Foreigners who do not download the app will not be allowed to enter the country at airports, the KCDC said. Until now, mobile applications were downloaded only when smartphone owners agreed to the measure.

Also, foreigners who do not follow the self-quarantine rule without giving proper cause will be immediately deported, the officials said.

“Foreigners who leave their home without notification will immediately be deported,” government official Park Jong-hyun said, adding that the measure is part of a zero-tolerance policy.

The government also said a so-called “code zero” will be implemented for both nationals and foreigners who leave home during a self-quarantine period and police officers will be immediately dispatched to their location.

Code zero is the highest level of a five-tier system of emergency measures that police use in cases such as kidnapping.