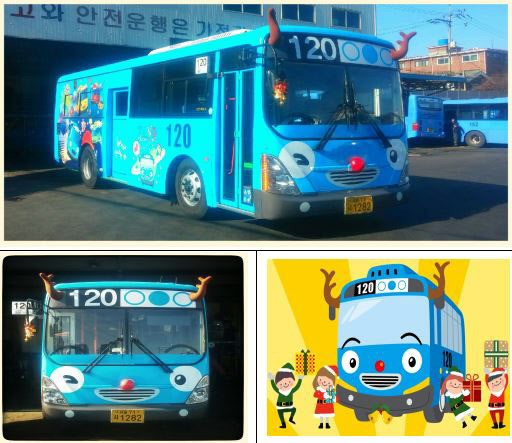 SEOUL, Dec. 9 (Korea Bizwire) – Tayo buses, decorated with the main characters of the famous Korean cartoon series Tayo the Little Bus, have remade themselves into Rudolf the red-nosed reindeer to celebrate the end of 2014.

The Seoul Metropolitan city government announced on November 8 that it would operate 26 Rudolf-decorated Tayo buses until the middle of January next year. The buses will be decorated with a red nose, antlers, and moving eyes as the city government plans to install LED lights to express ten different eye movements.

In order to conduct a pilot test on the moving LED lights, a No. 1165 Tayo bus with moving eyes has been operating on Seoul roads since October. The 26 buses are expected to run from the 10th this month for about a month.

On weekends, the special buses will visit people in need to help cheer them up. They are scheduled to visit the Salvation Army Broadview Children’s Home and Geon orphanage on the 13th, and Amsa Rehabilitation Center and Down Community Center on the 20th to provide people in the institutions with public transportation education, Tayo performances and Santa magic shows. People wishing to obtain further information can visit the Tayo bus Facebook page at www.facebook.com/tayotayobus, or call  02-415-4103 or 031-8060-2560.

“I want to help the Tayo bus become one of Seoul’s cultural icons. I will try my best to make the buses beloved by all Seoulites,” said Im Jin-wook, who has lead the operation of the Rudolf Tayo buses.

“In the Christmas season, the Rudolf buses are expected to be a small gift to Seoul citizens. The city government will contribute to a safer and more convenient public transportation environment,” said Shin Jong-woo, a government official.

The city government has utilized many domestic animation characters to communicate with Seoulites. Aside from the Tayo buses, it came up with “Larva” subway trains, “Pucca” tour guidebooks and “Pororo” taxis.