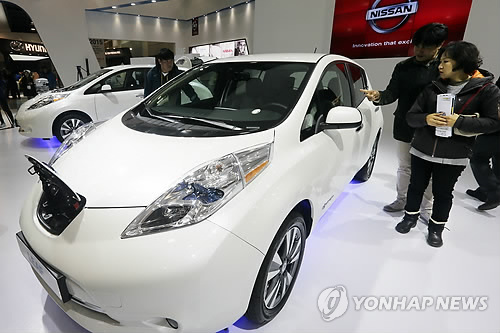 SEOGUIPO, Mar. 6 (Korea Bizwire) — The second International Electric Vehicle Expo (IEVE) kicked off Friday on Jeju Island for a 10-day run, attracting automakers and experts from around the world.

“We will see to it that this year will mark the start of the commercialization of electric cars on Jeju Island… and by the end of the year, we will up the number of such vehicles here to nearly 3,000 units from the current 852,” said Kim Dae-hwan, head of the IEVE organizing committee.’

Citing that the IEVE is “a unique event that only includes battery-powered vehicles instead of other eco-friendly cars, such as hybrids,” Kim said the expo holds a symbolic value for the electric car industry.

Some 50 battery suppliers and other businesses related to the EV industry from both South Korea and China, including local chemicals manufacturer LG Chem Inc. and state-run utility giant Korea Electric Power Corp. (KEPCO), are taking part in the exposition to promote technologies regarding secondary cells, chargers, electric motors and monitoring systems.

Hosted by the Ministry of Trade, Industry and Energy, the Ministry of Environment and the Jeju Province, the annual event is part of efforts to widen the use of eco-friendly cars in South Korea.’ 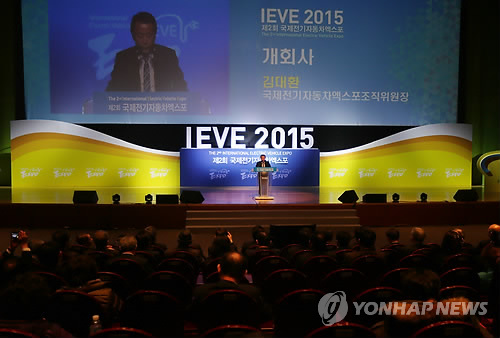 Kim Dae-hwan, head of the International Electric Vehicle Expo organizing committee, gives a speech during the opening ceremony of the event. (image: Yonhap)

Earlier in 2011, Jeju was picked to be developed into an EV test bed by the environment ministry, with ambitions to popularize the use of battery-powered cars and help reduce car emissions.

The island, located off the country’s southwestern coast, has been taking steps to revamp the region into a zero car emissions zone by 2030.

The government’s final goal is to push up the number of such cars on Jeju to 371,000 units by 2030 so that all residents here become EV drivers. As of 2014, the island had a little over 850 EVs registered.

As part of measures to help reach the goal, the environment ministry plans to have 1,515 electric cars distributed on the island this year, with plans to provide 22 million won (US$20,025) to each buyer of EVs.’ 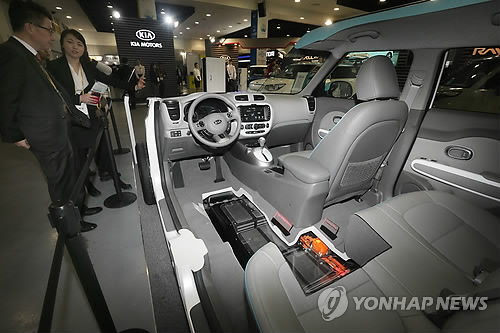 Visitors at the International Electric Vehicle Expo take a look at the interior structure of an electric car exhibited at a booth. (image: Yonhap)

Local companies, teaming up to foster the EV market growth, signed a memorandum of understanding on Friday with the province and the trade ministry to invest a total of 32.2 billion won for installing additional charging stations throughout the country.

Under the latest agreement, KEPCO, KT Corp., Hyundai Motor Co., Kia Motors Corp. and several other firms will help set up 5,580 car chargers, of which 3,750 will be installed on Jeju Island.

The IEVE also gives visitors a chance to test drive an EV from a choice of 23 different models manufactured by six carmakers throughout the 10-day event.

A five-day conference on the sidelines of the expo is scheduled to begin Tuesday to open up a discourse among industry experts to share studies on EV-related technology and on policies to help expand the necessary infrastructure.

The EV market in South Korea, although still relatively small compared with other countries, is rapidly expanding, with sales having surged 65.5 percent on-year to 1,183 units last year from the 715 units sold in 2013.