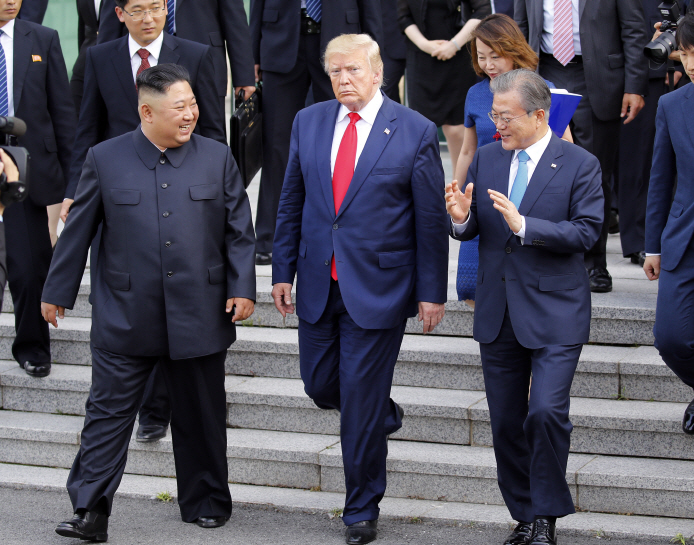 SEOUL, Jul. 3 (Korea Bizwire) — More than six out of 10 South Koreans positively evaluate the historic meeting among the leaders of South Korea, the United States and North Korea in the Demilitarized Zone (DMZ) separating the two Koreas, according to a survey released on Wednesday.

The survey, conducted by public pollster Realmeter with 501 adults aged 19 or older nationwide, found that 62.7 percent of the respondents gave a positive assessment of the meeting that took place on Sunday and paved the way for Washington and Pyongyang to restart denuclearization talks.

U.S. President Donald Trump, alongside South Korean President Moon Jae-in, traveled to the truce village of Panmunjom in the DMZ as part of his trip to South Korea and held sudden talks with North Korean leader Kim Jong-un.

Out of all the respondents, 29 percent offered a negative response to the meeting as it ended without a detailed deal to bring about the North’s denuclearization.

The remaining 8.3 percent declined to answer or said they don’t know the issue well.

Approval rates ranging from more than 50 percent through 95 percent were shown in all regions and age brackets among progressive and middle-of-the-road supporters and people supporting the ruling Democratic Party, the opposition Bareunmirae Party and the opposition Justice Party.

In contrast, 83.2 percent of supporters of the main opposition Liberty Korea Party and 58.5 percent of conservative respondents negatively evaluated the meeting, it added.

The survey, conducted Tuesday at the request of news website OhmyNews, has a margin of error of plus or minus 4.4 percentage points and a confidence level of 95 percent.

In another poll released by the National Unification Advisory Council, 66.4 percent of the respondents said the trilateral meeting of Moon, Trump and Kim had a “positive impact” on resolving the North’s nuclear issue.

Another 29.4 percent said the meeting had a “negative impact.”

The survey was conducted on Monday and Tuesday on 1,000 adults. It has a margin of error of plus or minus 3.1 percentage points and a confidence level of 95 percent.