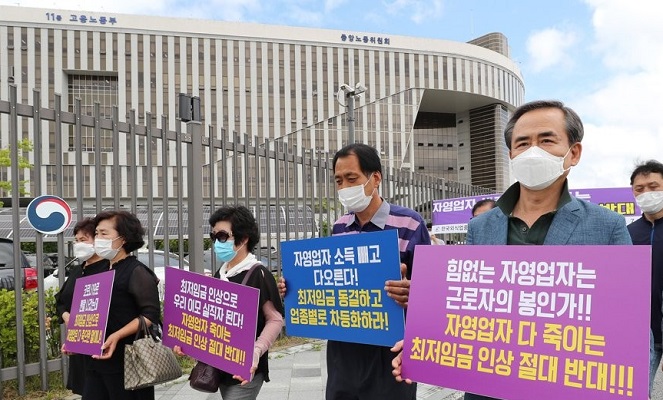 A group of restaurant owners stages a campaign against the increase of the minimum wage for 2021 in front of the labor ministry in Sejong, central South Korea, on July 10, 2020, citing their business difficulties. (Yonhap)

SEOUL, June 17 (Korea Bizwire) — 6 out of 10 job seekers think the minimum wage should be frozen or lowered, a local trade federation said Wednesday

The Korea Federation of Small and Medium Business conducted a survey of 700 job seekers, 48.1 percent of whom said that the minimum wage for next year should be frozen at this year’s level, while 15.7 percent said that it should actually be lowered compared to this year’s wage.

In other words, 63.8 percent of the respondents claimed that next year’s minimum wage should be the same or lower than this year’s level.

The survey also inquired about the difficulty in finding a job following the outbreak of the coronavirus, with 93.5 percent of job seekers saying that they felt it had become more difficult for them to get a job.

Another 64.3 percent of the respondents said that they experienced a reduction in working hours or difficulty finding a job due to the increase in the minimum wage.

At 80 percent, the vast majority of the respondents expected that another minimum wage hike next year would result in a decrease in the number of jobs available.

Roughly two thirds of the respondents picked job creation as the most urgent labor policy issue, followed by minimum wage increases at 13.2 percent, limiting working hours at 10.4 percent, and the expansion of welfare policies, including time off, at 7.4 percent.