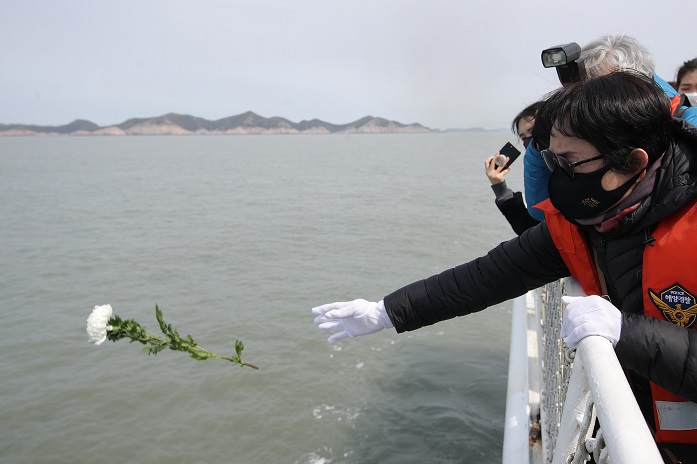 A victim’s family member throws a flower into the waters near where the Sewol ferry sank off the coast of Jindo Island in South Korea on April 16, 2021. (Yonhap)

JINDO, April 16 (Korea Bizwire) — Families of victims of the Sewol ferry disaster returned Friday to the unforgiving sea that swallowed their loved ones seven years ago, a disaster that overturned their lives and left a lasting scar for the nation.

Onboard a ship rocking in choppy waters off the southwestern tip of the country, they cried as they mourned the victims, with the painful memories still fresh.

Seven years ago on the day, the 6,825-ton ferry, carrying 476 passengers en route to the resort island of Jeju, capsized off the coast of Jindo Island.

The incident, one of the country’s worst peacetime disasters, killed 304 people, including 250 high school kids and 11 teachers on a school field trip.

“This year’s anniversary feels all the more special, as the day of the week and the weather are the same as those from the accident day,” Lee Yong-ki, the father of Lee Jin-ho, a high school kid who was killed in the disaster, said.

“I can’t help but feel a lump in my throat.”

“We haven’t been able to find the truth behind the Sewol incident and it is still ongoing,” he said, imploring the government to get to the bottom of the disaster.

The sinking of the passenger ship was broadcast live across the nation, traumatizing people who felt helpless and angry over the painfully slow rescue operations. 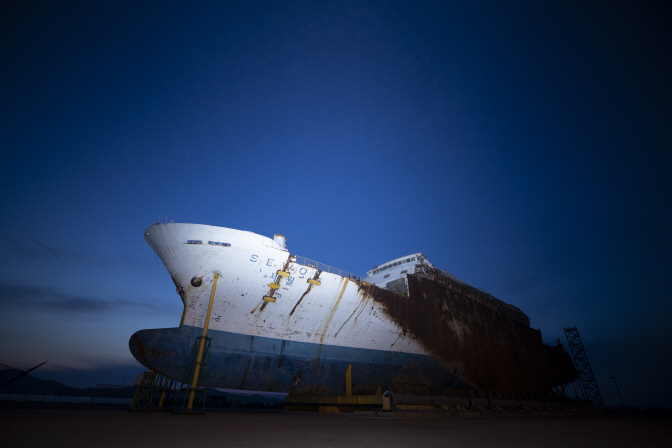 It led to the resignation of a prime minister, criminal convictions for maritime officials and the ferry’s captain, followed by investigations seeking the root cause of the accident and answers to various suspicions.

During the memorial ceremony, the families threw flowers into the water and paid silent tribute, as Lee called out the names of each student victim.

Some kept shouting, “I love you,” and others collapsed on the deck and wailed. Families cuddled together to comfort each other over their unfathomable losses.

“I had been afraid to come near the waters of the incident for a while, but I came here today because Yoo-min stopped appearing in my dreams,” said Kim Young-oh, the father of Kim Yoo-min, one of the victims.

He staged a hunger strike for 46 days in 2014, demanding the government enact a special law to investigate the disaster.

“Coming here made me miss Yoo-min even more. If I think more of her, she might come to my dreams,” he said.

“Seven years have passed, but there are many speculations out there,” he said. “I am worried that finding the truth will only become more difficult if a new government takes office while nothing concrete has been found.”

A resident from the nearby Wando County, who was onboard the ship to help the families, said that the state response was “poor,” and that the passengers were just “left alone” until they died.

“It still makes me cry,” the resident, surnamed Kim, said. 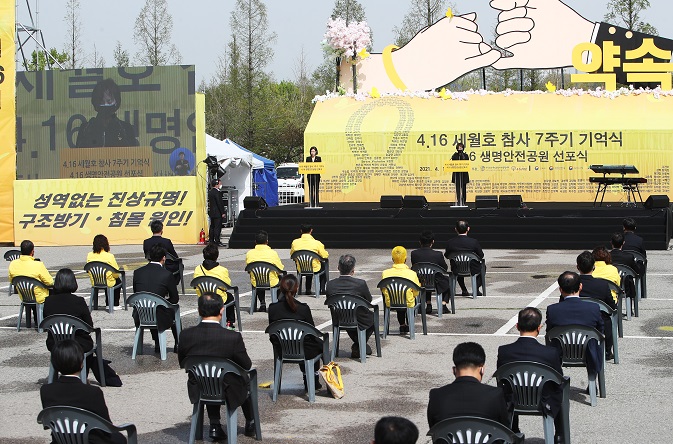 Mourners and bereaved families attend a memorial service to pay tribute to the victims of the 2014 sinking of the ferry Sewol, in the city of Ansan, south of Seoul, on April 16, 2021, the seventh anniversary of the accident off South Korea’s southwest coast that claimed more than 300 lives, mostly high school students on an excursion. (Yonhap)

Memorial events took place around the country throughout the day.

In Ansan, some 42 kilometers southwest of Seoul where most of the high school victims lived, the government held an event in a neighborhood park in the afternoon, attended by government officials and lawmakers, including Gyeonggi Gov. Lee Jae-myung and Rep. Joo Ho-young, floor leader and acting head of the main opposition People Power Party (PPP).

A silent tribute was followed by memorial addresses in remembrance of the victims, whose absence left a gaping hole in the city with a population of 655,800. The event was live-streamed on YouTube.

“The Republic of Korea is different before and after the Sewol disaster. Since then, there have been some meaningful changes,” Education Minister Yoo Eun-hae said during her speech.

“I take this opportunity to promise once again that the government does its best to create a safe nation for children,” the minister said.