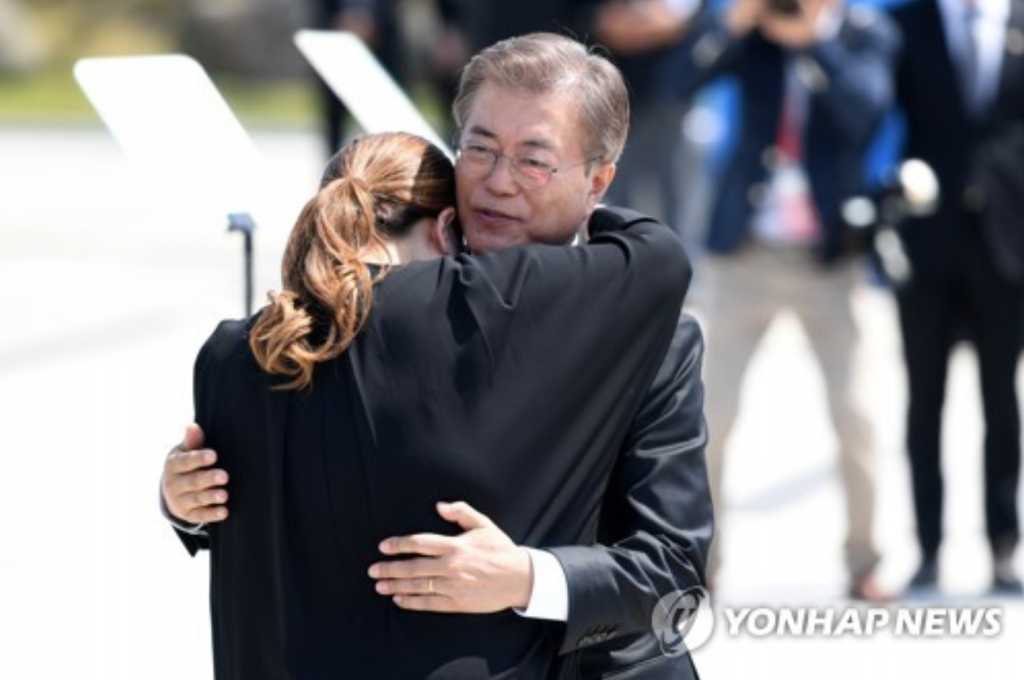 President Moon Jae-in comforts a bereaved family member, Kim So-hyung, during an annual ceremony at the Gwangju May 18 National Cemetery on May 18, 2017, to mark the 37th anniversary of a pro-democracy uprising that took place in the city. Hundreds of citizens were killed in the city during their protests against the military junta of Chun Doo-hwan in May 1980. (image: Yonhap)

In the survey conducted from Tuesday through Thursday by local pollster Gallup Korea, 87 percent of the respondents said Moon will do well in his state management. Seven percent painted a negative outlook on his future performance, while 6 percent declined to provide an answer.

The survey was conducted on 1,004 eligible voters after Tuesday’s presidential election in which Moon of the Democratic Party (DP) won a widely expected victory with 41.1 percent of the vote.

Former Presidents Park Geun-hye and Lee Myung-bak garnered 71 percent and 79 percent, respectively, in the Gallup surveys conducted in the second week after their inaugurations in 2012 and 2008.

In the latest survey, the ruling party received a support rating of 48 percent, up 13 percentage points from a survey conducted right before the May 9 presidential vote. The main opposition Liberty Korea Party and the People’s Party were tied at 8 percent, while the Bareun Party and Justice Party received 7 percent each.

On Prime Minister-nominee Lee Nak-yon, 60 percent of the respondents said he is “suitable” for the government’s No. 2 post, while 5 percent disapproved of him.

The survey’s margin of error is plus or minus 3.1 percentage points, with a 95 percent confidence level.