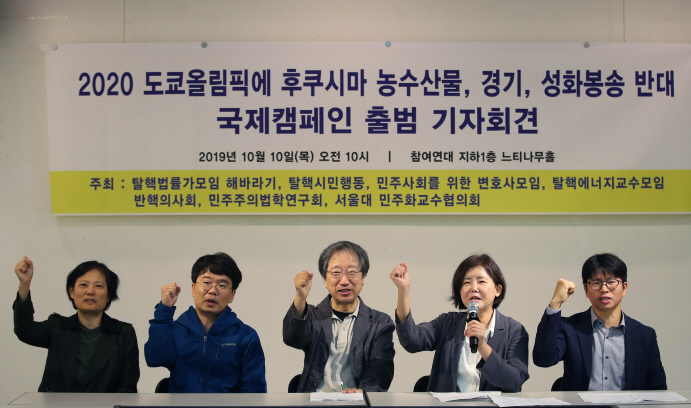 Environmental academics and activists hold their fists up at a press conference announcing the launch of their campaign on Oct. 10, 2019. (Yonhap)

“We launch an international campaign to protect thousands of athletes and visitors at the Tokyo Olympics from radiation risks and to stop the Japanese government from using the Olympics as a tool” to conceal lingering damages from the Fukushima nuclear crisis, the environmental groups told a press briefing in Seoul.

Taking part in the initiative are a handful of Korean environmental organizations, consisting of activists and academics, as well as major environmental and anti-nuclear groups based in Germany, Taiwan and the Philippines.

The civic groups demanded the Japanese government and Olympics organizers refrain from providing food produced near Fukushima and cancel games scheduled to be held in the city.

They also urged the torch relay to be held in areas outside of Fukushima, which was hit by the nuclear disaster caused by a 2011 earthquake and tsunami.

They also claimed that if Japan seeks to misuse Olympic events for a political or commercial purpose, it would goes against the Olympic spirit.

The environmental groups said they plan to collect signatures through an online website and hold international conferences to raise awareness on the risks of radiation.

Some baseball and softball games are scheduled to take place at Fukushima Azuma Baseball Stadium, according to the Tokyo Organizing Committee of the Olympic and Paralympic Games website.

It also shows that a 121-day torch relay will “commence on March 26, 2020, in Fukushima Prefecture and start its journey southwards” in an aim at “showcasing solidarity with the regions still recovering from the 2011 earthquake and tsunami.”