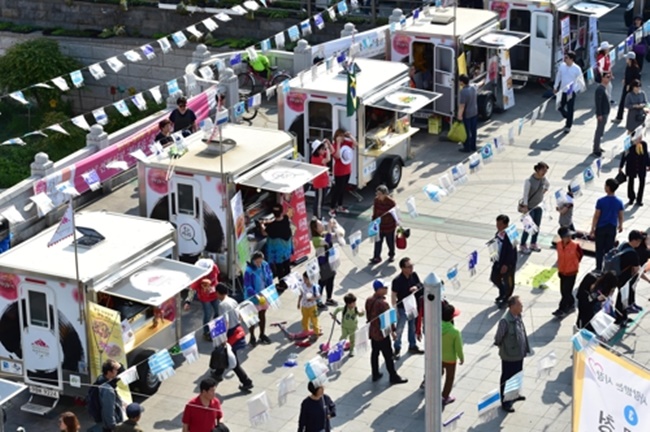 The Ministry of the Interior and Safety announced that an amendment to the management and promotion off outdoor advertisements act has passed at a Cabinet meeting. (Image: Yonhap)

The Ministry of the Interior and Safety announced that an amendment to the management and promotion off outdoor advertisements act has passed at a Cabinet meeting.

According to the enforcement ordinance, food trucks will be able to display advertisements of other businesses just like commercial vehicles and trucks.

Since they were first officially permitted three years ago, food trucks have been seen as a popular business venture among young people in South Korea, but many struggle with profitability.

The government believes that allowing trucks to display advertisements will be an effective way to help them overcome financial difficulties.

In addition, self-employed business owners will no longer have to request permission to use their sign every three years.

Previously, business owners who failed to extend the right to use a sign for commercial purposes every three years were met with a fine of 200,000 won.

Commercial signs that are smaller than five square meters in size with a cover to block light from emitting will be allowed to be displayed, also without being registered.

Under the new act, around 513,000 signs across the country are expected to be exempt from the three-year approval system previously put in place.