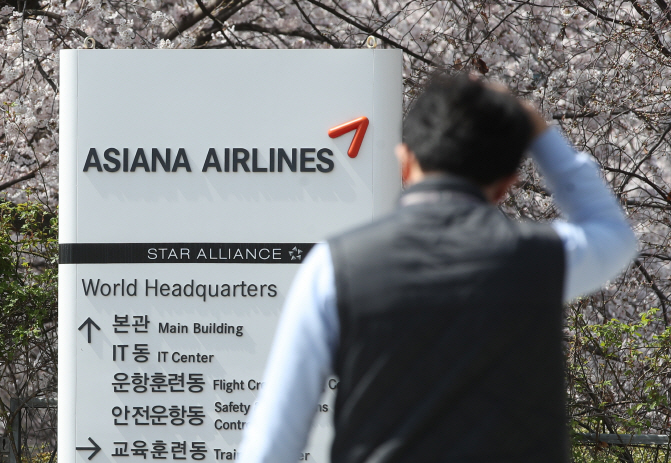 Kumho Asiana plans to complete the sale of the airline unit within this year. (Yonhap)

Kumho Asiana Group, the airline’s parent, and its lead manager for the sale, Credit Suisse, received letters of intent from potential investors, including Aekyung and local activist fund Korea Corporate Governance Improvement (KCGI), according to sources.

Kumho Asiana aims to sell a 31 percent stake in Asiana held by its subsidiary, Kumho Industrial Co., together with its two budget carrier units — Air Seoul Inc., which is wholly owned by the airline, and 46 percent owned Air Busan Co. — as part of its broad restructuring efforts.

But analysts estimate the deal could be worth up to around 2 trillion won ($1.6 billion) when a management premium and acquisition of new shares to be issued are considered.

KGCI also formed a consortium to enter a bid, but it didn’t reveal its local partner.

Major conglomerates, such as SK, CJ, and Hanwha, have been widely mentioned as potential buyers for Asiana, but they said they did not submit their respective bids for Asiana.

Kumho Asiana plans to complete the sale of the airline unit within this year.

The South Korean transportation conglomerate is expected to shortlist the bidders this month before due diligence. It is expected receive final binding bids no later than November.

A weak won drives up not only the value of dollar-denominated debts when converted into the local currency but also fuel purchasing costs.

It owes financial institutions a total of 2.7 trillion won in short-term obligations, with 660 billion won of loans maturing this year.